Stephon Marbury is the good kind of crazy 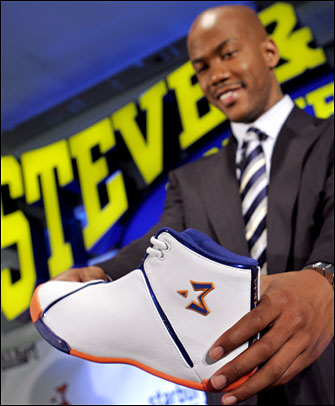 No time for small talk, let’s get right into it. Stephon Marbury was a guest on Mike’d Up last night. If you are not familiar with the show, it’s Mike Francessa of Mike and the Mad Dog fame’s Sunday night TV show. Mike wasn’t there, which is unfortunate because he is the star of the show. Bruce Beck does a credible job of filling in, but he’s more of a traditional talking head sports news guy than a smug fan-baiting villain like Mike. Anyways, none of that matters. Stephon Marbury was on the show, and it was bananas.

If I had to compare Steph’s performance to another person, it would be Tracy Jordan from 30 Rock. Not Tracy Morgan, the actor who plays him. He’s too sane. I’m talking about the stabbing robot himself, the character on the show. Steph is out of his mind. The surly Marbury was nowhere to be seen.

He answered questions with rambling non-sequiters. He received a phone call from his wife during the show and he started talking on his cell. He yelled over the host’s voice when he was trying to read highlights. He got all emotional talking about KG. He refused to answer some questions and acted like he was really offended that the host would put him on the spot. He said he might average 12 dimes and 2 assists whatever that’s supposed to mean. He said the Knicks can win the trophy this year, but he doesn’t play for trophies even though that’s what it’s all about, he just plays to win. I have no idea what any of that means. If you are confused, then I am doing my job well conveying this info to you.

I’m telling you, this interview was on the level of Danny Devito’s sloppy drunk appearance on The View. It was like when Courtney Love would basically OD and then do interviews. Perhaps Stephon is just high on life. Either way, it was an uncomfortable and amazing moment in time. Here is one summary, and here is the TV show’s home page. Since Francessa wasn’t the host, I don’t know how hard they will try to post video of it. But this is bonus Marbury madness from a charity event over the weekend. Jordanesque. Tracy Jordan.

I’m out on vacation all next week, so that means there are a hundred billion things I have to get done before I go. Writing posts is the most fun and creatively fulfilling part of my job, but that has to take a backseat to other responsibilities. I was in Boston over the weekend, where I picked up a little present for Khalid. Hopefully he doesn’t come in too early today, because part of giving him the gift involves vandalizing his computer. If he reads this before I see him, oh well I’ll just hand him the gift. Other important news from over the weekend is the Nets signing Vince Carter to a huge deal, which means they were satisfied with the effort he put forth this past season, and they are comfortable with the highs and lows that come with Vinsanity. Now he’s got $60 mill guaranteed. I am sure he will bring it every night to justify such a lavish contract.

If anyone has more on Steph’s TV appearances over the weekend, please don’t be shy. Share with your community.