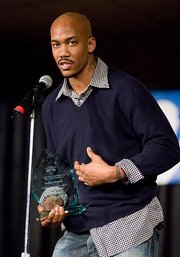 For all of the goodwill that Stephon Marbury has built with basketball fans this summer (and particularly, those in the hoop blogosphere, thanks to his hilarious interviews and nonsensical postings in the NY Post), he might have just flushed it all down the toilet with one statement regarding soon-to-be inmate #7 Michael Vick.

“We don’t say anything about people shooting deers and shooting other animals, you know what I mean?” Marbury said.

“From what I hear, dogfighting is a sport. It’s just behind closed doors and I think it’s tough that we build Michael Vick up and then we break him down … I think he fell into a bad situation.”

I mean, he does make a decent point about the double-standards when it comes to big-game hunting and dog-fighting, but come on dude, did you read about the cruel things that were done to those dogs?

It’s time to hire a good PR agent, Marbury, or better yet, time to shut up for a while.