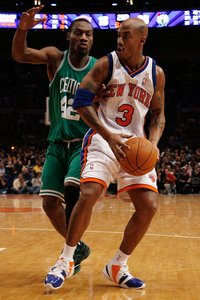 We haven’t discussed Stephon Marbury in this space for quite some time now, and that’s a shame. We need him in our lives, for he is a constant source of enlightenment, bewilderment, entertainment, and general confusion.

Anyway, let’s get up to speed on the latest: A few days ago, Starbury met a couple of dudes at a pizza joint, and he liked them so much that he went back to hang out and watch politics at their crib … the homeless shelter. After someone commented on his coming off the bench for the Knicks, this was his reply: “It’s just a game. There’s more to life.” Indeed.

Last night, as expected, Mike D’Antoni gave Marbury the starting nod over Jamal Crawford, and Eddie House (whose team predictably romped the Knicks) made the mistake of irritating New York’s most fascinating athlete. From the NY Times:

[The verbal duel] lasted several minutes and several possessions. After Marbury drew a foul on Kendrick Perkins and hit two free throws, he turned and screamed at House, from midcourt: “You’re a bum!”

When play returned to the Celtics’ side of the court, House chirped, “Don’t worry about me. You better worry about Ray Allen,” whom Marbury was guarding. Marbury shot back, “You’re nothing!” then added, “You’re caught up in basketball. Get caught up in life.”

Get caught up in life. That may very well be my favorite new saying.