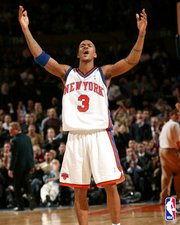 Despite my father’s insistence, I never went into Law School (sorry, Dad!), but I’m pretty sure this is one of the first lessons they teach you: Under no circumstances shall you let Starbury take the stand. And the reason is fairly simple: He’ll say some crazy sh*t.

For example, today, Stephon took the stand in the Isiah Trial, and as expected, he did not disappoint. From the Daily News:

Nervous Knicks star Stephon Marbury took the stand today in the explosive $10 million sex-harassment suit that’s rocking the Garden and admitted he lured one of the female accuser’s subordinates into his car.

Marbury did not say explicitly they had sex as they sat parked outside a Manhattan strip joint, as fired Knick exec Anucha Browne Sanders has claimed.

“We got together right across the street,” Marbury testified in Manhattan Federal court.

Like his coach, Isiah Thomas, Marbury appears to have a certain affinity for the word “bitch”. The Knick point guard admitted to using the word when addressing Anucha Browne Sanders after she wouldn’t give him all of the game tickets he had requested for his friends and family.

New York Knicks basketball: There’s nothing quite like it!