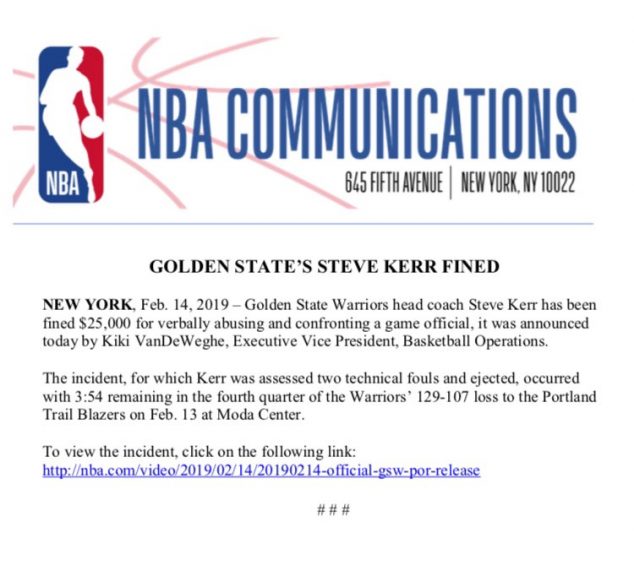 Kerr lost his mind (and was subsequently ejected) after Draymond Green was whistled for a flagrant foul on Blazers big man Zach Collins.

Green, for his part, shrugged off the controversial call as a byproduct of the “Draymond Green rule.”

Per The San Fran Chronicle and ESPN:

Roughly 10 minutes after the final buzzer sounded, Kerr joked, “Get the f— out of my way!” as he approached the media scrum. His signature sarcasm had returned. In the grind of an 82-game season, Kerr knows he is bound to toss a clipboard or two.

“I’m going to have to ask (team trainer Drew) Yoder if the clipboard broke when I threw it down,” Kerr said. “But I got a little anger out, so that was good.”

Green said he appreciated the way Kerr stood up for him at the end of the game.

“I loved that too,” Green said. “That was amazing. It’s great. He set the tone for us to close the game the way we did. It was good. I got a tech also for standing there; that probably should be a delay of game, not a tech. You can’t give somebody a tech because they’re standing there. That’s a delay of game. But whatever. Probably a Draymond Green rule too.”

Related
Draymond Green: ‘No One Wants to See Us Win Again’