Steve Nash Chose the Lakers to Stay Close to His Kids 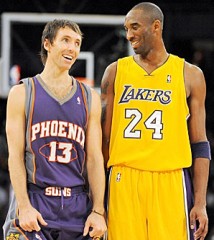 There were some important factors in Steve Nash’s decision to sign with the Los Angeles Lakers over his other suitors from around the NBA: the money ($27 million over three years), Kobe Bryant (Nash and KB spoke this week about playing together), and the opportunity to win a championship before he retires.

Most important of all for Steve Nash, though, is the chance to stay close to his children (who reside in Phoenix) now that he will be living and working in Los Angeles.

Nash explained the move to Hollywood, in a statement provided to ESPN:

“After talking with (owner) Robert (Sarver) and (president of basketball operations) Lon (Babby) we’ve agreed that it’s time for both of us to move in new directions. I approached them and asked if they would be willing to do a sign and trade deal with L.A. because it is very important to me to stay near my children and family. They were very apprehensive and didn’t want to do it. Fortunately for me, they reconsidered. They saw that they were able to get assets for their team that will make them better, assets they would not have otherwise had and it made sense for them to do a deal that helps their team get better.”

“I couldn’t be more grateful to the organization and Robert in particular. I know how hard this was for him and that fact that he was able to help me and my family in this way … it means a lot and says a lot about his character. I will never forget this gesture. Above and beyond. The Phoenix Suns are an amazing organization and fans should be excited about their future. I hope the Suns win a championship some day soon for all the amazing fans and wonderful people in the organization.”

According to the report, Ramon Sessions — who opted out of his contract in search of a longer, richer deal — is no longer in the Lakers’ plans going forward.

L.A. will reportedly keep the core of Kobe Bryant, Pau Gasol, Andrew Bynum and Steve Nash together next season as the organization looks to get back into NBA title contention.