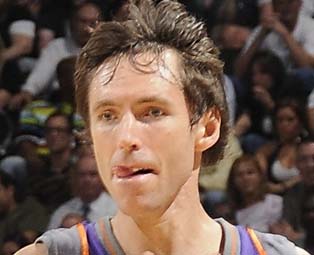 Steve Nash is thirty-four years old, he has a bad back, and could use all of the rest that he can get if Phoenix plans to last longer than a single Playoff round next year. Management thinks they can get him to sit out 12 games of the seemingly interminable regular season; Nash, though, isn’t holding his breath.

From the East Valley Tribune:

“What do you think of (general manager) Steve Kerr’s plan to limit you to 70 games next season?”Nash gives me that “you’re-not-going-to-get-much-out-of-me smile” and then proceeds to, well, not give me much. “We’ll see how it goes,” he says. “Those are great intentions, but is it realistic? We’ll see.”


Is Phoenix good enough that it can sit Nash for 12 games? “I don’t know,” Nash says. “Probably not.”

The team – which has played .235 ball with Nash in street clothes – already relied on him heavily during the D’Antoni Era; he has every right to think he’ll be seeing a ton of minutes under new coach Terry Porter.

With Phoenix promising to play actual defense from now on, though, Steve Nash’s effectiveness will be something to keep an eye on throughout the season.