Steve Nash Isn’t Mad At David Stern, But He Really Is 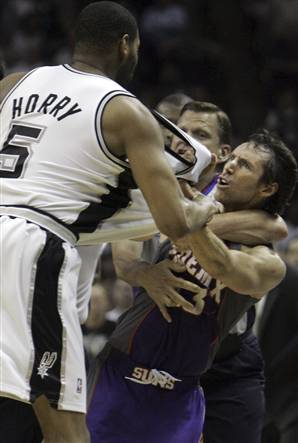 We know Steve Nash as the selfless leader of the Phoenix Suns, the ultimate team-guy with no ego, and someone who always says the right thing. Unless you ask him for his thoughts on the Iraq War (or an enterprising reporter gets a hold of his reading material), Steve never seems to stray too far from the company line.

In the epic Spurs series last May, many felt that the Suns got jobbed by the League when it suspended Amare Stoudemire and Boris Diaw for game 5 (following Robert Horry’s infamous forearm shiver that sent Nash crashing into the sideboards), effectively ending a wildly entertaining series that seemed destined to go the distance.

Steve Nash (and the rest of the team) were understandably pissed off, but throughout he kept saying the right things and tried to live with the outcome. It’s been five months since the incident, and Nash – try as he might to pretend that it’s no longer on his mind – is still fuming. From the Arizona Republic:

“I’m not into worrying about what Stern is doing. I figure I’m not going to win that battle anyway. I’ve lost it in the past so why bother getting involved.”

“If I let it, it’ll distract me. I’ll be (ticked) off all the time. And that’s like every other week, a decision comes down that you don’t understand. So just stay out of it. Bowen stepped on Amaré’s ankle and kneed me in the balls. No suspension, whereas other guys (with) maybe less infractions get suspended on the first one. I’m not in the office. I don’t know why they decide what they decide. Therefore, I’m not going to even bother to start judging their decisions because I don’t get it.”

Seems like a lot of people are mad at David Stern these days; wonder why that is?

(Side Note: The NBA season officially kicks off tomorrow night. After a tumultous summer that almost refused to end, I’m told we’ll get to watch real games, with something tangible at stake. Sounds like a pretty cool idea.)