Steve Nash May Consider Toronto in 2010 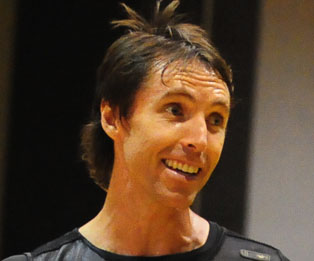 The two-time MVP says he would like to play at least four more seasons in the NBA, and there’s a chance he plays a few of those years with the Raptors.

Nash becomes a free agent in 2010 (Jermaine O’Neal’s contract will expire as well), and Toronto is poised to have lots of money (around $25 million) to lure free agents. Michael Grange of the Toronto Globe & Mail spoke with Nash recently.

“I’ve enjoyed my success in Phoenix and would love to stay here,” Nash said this week in an interview. “But if not Phoenix, playing in Toronto would be a dream come true in many ways.”

Nash would be a guaranteed seat-seller, and the Raptors would have money available to sign him. Yet the main question will be the co-existence of Nash and Jose Calderon and whether Nash would be willing to accept a backup role.

Still, I say sign Nash and the rest can be ironed-out later.