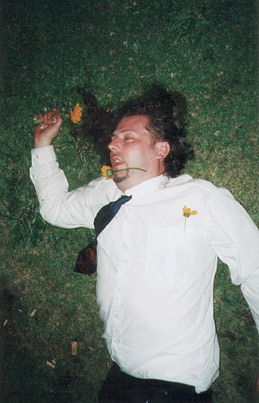 It’s Sunday morning, nearly 10 A.M. in Vegas. Last night was, in a word, crazy. Russ gave you the blow by blow breakdown of the Saturday Night All-Star festivities. It was fun to be there, but the madness of this weekend didn’t really get going until after we headed back out to the parties later on. Everyone has their updates coming so I don’t want to ruin it for you. A quick re-telling of the things Russ couldn’t have known about from the Saturday Night All-Star showcase:

Ben was very upset with that one judge wearing the leather jacket and jeans. MJ, such a hater. Let the kids live. Ben also used profanity in public to express his disappointment with Vince Carter being on the panel.

I chose to wear a new hoodie I received with all-star logos inside card suits print all over it. I was given the nickname L’il Jeezy.

Lang took some of my money when I put it on Bavetta. That was a stupid move on my part.

The dunk contest just isn’t the dunk contest without Mutombo there. From our seats the two guys that were having the most fun reacting were Wade and Shaq, who just aren’t the same as Dikembe. They also wore nearly matching suits. I loved that Damon Jones was in the three point contest while Shaq was there in support of… the winner Jason Kapono.

I don’t know how it came across on T.V., but Cedric Ceballos was entertaining except for all of the times he was talking while a guy made his approach on a dunk or something.

A smely old man put his arm around my chair. I think he liked me. VEGAS!

It felt like there were so many media members and too cool for school celebs in the building that cheering was subdued.
Don’t say even the slightest negative thing about Mary J Blige around Khalid or Ben. Just don’t.

Outside in the parking lot, after the event on our way back to the hotel we saw Winky Wright try to get past a fence. The fence won.

So, that’s some of what happened from All-Star saturday. We took about an hour break and then went out to some parties and stuff. Lang should have that story for you later. All I can say is that Vegas is every bit of insanity that I thought it would be. The cab lines extended to over an hour… at 4:30 A.M.

One superstar/future hall of fame type was at a party we attened and he knew every word to some Hip Hop classics that even I don’t know every word to, and I pride myself in knowing every lyric to every song ever written. Ultimate respect.

The women here, groupies and otherwise… off the proverbial chain.

Did some of us find themselves on an outdoor terrace 45 stories (or whatever it was) up overlooking the whole city? Yes. Were we balling out of control? Absolutely. Did I feel like this minus certain words? Of course.

I managed to not fall asleep until our cab ride home. Maybe Lang will make a big deal out of that or something, but I was just getting my energy up for a possible 3rd wind to go back out there. The lobby was packed at 6 A.M. or so when we rolled in. I just went to bed for a few hours though.

We’ve got various power brunches to attend. Need solid foods in me. This place and trip is the greatest. Everyone I talk to keeps asking me about the dunk contest and stuff. I think like 3% of the people here watched it.