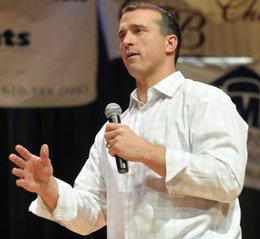 If you’re an avid SLAM reader, you’re probably familiar with Chris Herren’s story. In the off chance you’re not, here’s a brief synopsis: A Massachusetts native, Fresno State standout (via Boston College) and second-round pick in the 1999 NBA Draft, Herren’s once-promising basketball career was quickly derailed by an unforgiving struggle with drugs and alcohol, which ultimately disintegrated his hoop dreams and nearly took his life. His plight was so grave, in fact, that in some senses, Herren is a living corpse. For instance, in his memoir published last May, Herren reflects on the time he overdosed on heroin and died, only to be miraculously revived by two EMTs 30 seconds later. Yeah, his story is one of those.

Heading down the slipperiest of slopes, Herren soon realized the only way to crawl out of drug-addiction hell was to tackle the monster head-on, with hopes of gradually piecing together a life reminiscent of shattered glass.

In short, after completing intensive rehabilitation programs, Herren eventually overcame his seemingly insurmountable demons to become a responsible husband and father, and for the first time in his adult life, he was in control. On one level, Herren was finally free; he made it. But on a much greater level, he was just getting started.

Every day, we witness and reward the strength, toughness and perseverance of athletes across the sports world. But almost always—whether it’s Kobe Bryant’s impossibly amazing buzzer-beater on a night when he shoots 3-for-20, or Eli Manning’s Super Bowl-winning pass to a triple-covered David Tyree—the efforts we applaud are transient, and in the bigger picture, relatively insignificant. Herren’s efforts, however, are anything but.

Drug and alcohol-free since August 1, 2008, Chris has refocused his life to put sobriety and family above all else. In 2009, Chris launched Hoop Dreams with Chris Herren, a basketball player-development company that provides basketball training through private sessions, clinics and camps.

Hoop Dreams was just the tip of the iceberg, though. Inspired by the overwhelmingly positive response to his memoir, Basketball Junkie, which details Chris’ arduous journey from prep star to NBA player to drug addict, Chris found his true calling: to further educate the youth on the dangers of substance abuse and to provide assistance to individuals and families suffering from addiction. With this new calling, er, duty, the NBA player-turned motivational speaker and sobriety advocate established The Herren Project in 2011.

This week, Herren announced the launch of Project Purple, a substance abuse awareness program and sub-initiative of The Herren Project with goals to create awareness and educate the public on the epidemic of substance abuse—according to SAMHSA, in the U.S. in 2008, almost one third of adolescents ages 12 to 17 drank alcohol in the past year, 4,365 used an illicit drug for the first time, 7.5 million children under age 18 live with a parent with an alcohol disorder and 20.5 million people age 12 or older need treatment for an illicit drug or alcohol use problem but do not receive treatment—and to encourage teens and people of all ages to be “true to themselves, celebrate life and support one another.”

In support of Project Purple, the Prudential Tower and other Boston landmarks including the Massachusetts State House and UMass Boston Campus Center will “Go Purple” on Tuesday, April 24. On Monday, April 23, Herren will be speaking at the UMass Boston Campus Center to share his story, followed by the unveiling of the Project Purple billboard awareness campaign. Featuring the message “Stand Up Against Substance Abuse,” the billboards will span interstates and community locations from North of Boston to Western and Southern Massachusetts.

On Tuesday, the Project Purple Lighting ceremony will take place at The Shops at Prudential Center, and later in the evening Chris will be honored at the Celtics-Heat game as part of the “Heroes Among Us” program for his efforts. A Project Purple PSA will be featured during the game and Herren Project volunteers will be available on the concourse to share information about the initiative. Project Purple outreach initiatives will continue throughout April, which is also National Alcohol Awareness Month, with campaigns to raise awareness using social media targeted at youth.

Chris Herren’s dreams and aspirations were lost to addiction, but through his suffering emerged a new, more powerful voice. Herren knows he can’t turn back the hands of time, but he’s now doing everything in his power to make sure his experience remains, well, his experience, something future generations will never be able to relate to.