Straight To The Point 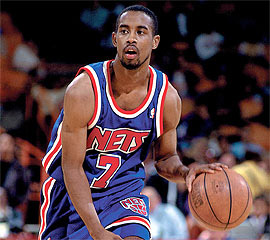 Everybody keeps saying this an amazing time for guard play in the NBA.

Everybody can shut the hell up.

Don’t get me wrong, these young cats can play, but how many of them have the well-rounded games needed to dominate for a decade?

The 1990s had a glut of amazing point guards, the kind of players whose names still roll off the tongue with ease. Gary Payton, John Stockton and Jason Kidd all plied their trade with skill and panache, but who is the best of the best? Let’s get to the list.

If a basketball player wears short shorts for his entire career despite the changes in fashion, is he:
A. An out of touch bumpkin with no sense of style
B. A maverick, unconcerned with style over substance
C. The best point guard of the 1990s

Stockton wasn’t a scorer, but he could score on damn near anyone. He set borderline illegal screens and was the most clutch point guard of his decade.

Where Stockton became an icon was with the ball in his hand looking to make a teammate better. Some point guards understood angles, pace and tempo as well as Stockton, none did it better.

Stockton saw his best assist averages in late 1980s, but even in the 1990s dropping 10 assists was a down year. And on defense he was a terror. Stockton ruled the 90s like Magic ruled the 80s, who cares what he was wearing?

Oakland’s Finest was the perfect blend of hood and Hickory High. His swagger and fundamentals could make your daddy’s daddy and the grandson bouncing on his knee take notice.

Sadly, Payton’s mouth sometimes distracts people from his ridiculous numbers. By the mid-90s, a stat line of 20 points, 8 assists and 4 boards, with a minimum of two steals was just a day at the office for Payton. Don’t forget the nine selections to the All-Defensive team and the fact that he’s the only point guard ever named Defensive Player of the Year.

Who knows, maybe if George Karl had realized a little earlier its sound strategy to have your best defender guard the best scorer on the opposing team Payton might have made Jordan’s first comeback a little less sweet… On second thought, not even the Glove had that kind of stopping power.

Right now, some folks are shaking their heads at Tim Hardaway beating out Jason Kidd for the number three spot on this list

Check the tape suckers. Kidd never dropped 22.9 points, 9.7 assists and 2.6 steals on 47 percent shooting in his SECOND year in the league. Nah that was the creator of the infamous U-TEP two-step.

Before Iverson unveiled The Crossover 2.0, Hardaway was rupturing ACLs and ligaments league wide. As a member of Run TMC in Golden State, Hardaway managed to get his, and keep Chris Mullin and Mitch Richmond fed.

Even when he moved to Miami, Hardaway was still dropping 18 and 8 for a Heat team where defense and overall goonery were paramount. (Sorry E-boy.)

Hardaway’s overall career doesn’t compare to Kidd’s, but in the 90s it would have made sense to take Tim six days a week and twice on Sundays… Pause.

It’s easy to appreciate the mastery, but remain unmoved by the man. There are no real reasons to dislike Kidd. His greatness is undeniable. Yet, “fanhood” seems harder to find.

Regardless, any list of the best point guards of the 90s that didn’t include Jason Kidd would lack credibility.

No-looks, lobs and bounce passes, oh my! The fast break was Kidd’s yellow brick road, and defenders got squashed like the Wicked Witch of the East.

Kenyon Martin, Richard Jefferson and Kerry Kittles all eventually found out that life without Kidd’s passes was as drab as black-and-white.

It’s a shame that Kidd doesn’t have at least one MVP award when a certain Canadian has two, but the world is full of injustices. Then again, Kidd regularly failed to crack 40 percent from the field, so that’s an issue. But, if ask any player who filled a lane in the 1990s which player they’d want in the middle with the rock, it has to be Jason Kidd. Word to munchkins and flying monkeys. No Imus.

I know what you’re thinking because I’m thinking it too.

K.J is pretty damn low on this list. But, sadly, Johnson was a frail dude in the 90s, and despite being capable of dropping 22 points, 11 assists and 2 steals on 50 percent shooting he couldn’t seem to stay on the freaking court.

Ankle breaking? He had that in spades. Mid-ranges in the grill? He had them too. And if the job calls for being able to dunk, one-handed on the best shot blocker of the modern era, well K.J would like to apply. He can start immediately.

Before injuries shut him down, K.J. was putting up Earvin Johnson numbers without ever developing a three-point shot. Maybe if the Suns had realized that having Dan Majerle guard Michael Jordan was a grave mistake they might have taken the 1993 Finals from the Bulls.

But, people in Arizona be tripping, you know?

Mark Price is at number 6 on this list and Penny Hardaway, Mark Jackson and Kenny Anderson haven’t had their names called?

No it’s not. Price is where he is because he knew how to run a team and get his numbers. The only weaknesses in his game were those put there by God. No matter how hard Price hit the gym, he wasn’t going to overcome being short with no hops and bad knees. Sorry.

But, check out Price’s numbers from the 1989-90 seasons where he dropped 19 and 9. He followed that up with 17 and 10 with 2.6 steals the next year.
If Price didn’t give his opponents at least 17 points and 7 assists while making them shake their heads at the range on his pull-up, well they considered themselves lucky.

The Price is, well you know the rest.

When considering where to rank Penny a decision had to be made. Should tantalizing potential or tangible productivity be rewarded? Potential won.

Penny Hardaway was The Man in the 1990s. His combination of size, strength, speed, court vision and hops was sickening. What he lacked in killer instinct, he made up for in pure, unadulterated talent. It’s impossible to overstate just how often his game made people say “Damn…”

Penny and Shaq were supposed to be Mickey Mouse’s version of Magic and Kareem, but personality conflicts and injuries ended that dream. Penny’s planned rebirth in Phoenix was mostly a dud.

But, when Penny was forcing Gary Payton, John Stockton and Clyde Drexler off the All-NBA first team and taking the manhood of sundry Indiana Pacers players, he was The Man. End of discussion.

Mark Jackson’s stats, particularly after his first two years, aren’t really “great.” Game film shows an obvious lack of hops or speed. There was a reason they called him “Turtle.”

But, slow and steady doesn’t just win races, it wins games. Mark Jackson played for teams that won games. In his 17 years in the league, he only missed the playoffs twice.

Jackson rarely averaged fewer than 8 assists a season, and despite never being known as a shooter, he actually shot 40 percent from three several times. Plus, who doesn’t remember him killing little guards with a jump hook that was as ugly as it was effective.

Yes, the shimmy was annoying. Yes, Scottie Pippen exposed all of his weaknesses in the playoffs. But, despite all of his handicaps, Mark Jackson succeeded where a variety of more talented “rabbits” failed.

Now if he could just get some new catchphrases.

His high-school career in Gotham City is the stuff of legend, and after making a cameo in “Lethal Weapon 3” at Georgia Tech, Anderson decided to take his talents to New Jersey. No Lebron.

But, by his third year, Anderson was putting up 18 and 9, while making high-schooler ballers all over America wish they had a left-handed handle and a tuck move in the lane.

Anderson and Derrick Coleman were supposed to be hip-hop’s answer to the country and western flavor of “Stockton to Malone” but sadly, it never happened. They both made the All-Star Team in 1994, but that would be the pinnacle of Anderson’s NBA career.

His production steadily declined, and his otherworldly handle wasn’t enough to prevent his jumpshot from making him a journeyman.

Anderson was NYC to the fullest, but, honestly, he could have been so much more.

Number 10 could have been number one to me…

Actually, Terrell Brandon should never hold the top spot of any list of point guards in the 1990s. But, the illustrious Sports Illustrated magazine did once rank Brandon as the best point guard in the NBA during that same decade.

Brandon gets the final spot on this list mainly because it was difficult to put another player ahead of him.

Iverson and Marbury were too young. Rod Strickland just didn’t seem to fit. Sam Cassell, while a better overall player, was too much of a chucker in his heyday to be considered a top point guard. And Mookie Blaylock isn’t even the most famous Mookie in America. Word to Rosie Perez.

Brandon, in one word, was solid. Before injuries to his knees, he could stick a midrange, penetrate the lane with ease and distribute the rock. Plus, he played well with others.

Besides, if Sports Illustrated wrote it, it must be true. Right?