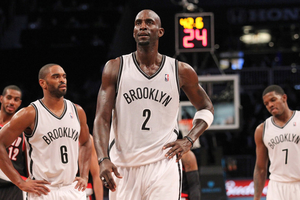 At the moment, the Brooklyn Nets are one very bad, very expensive basketball team.

They star-studded Nets are at the bottom of the Atlantic Division, and carry an ugly 3-7 record. The team held a players-only meeting after last night’s 108-98 loss to the visiting Portland Trail Blazers.

By the time the locker room opened 25 minutes after the game, virtually all of the players had left, or were in the process of leaving. Only Shaun Livingston, Jason Terry and rookie Mason Plumlee bothered to speak to the assembled media in the locker room, and only two players – Joe Johnson and Alan Anderson – spoke about the meeting itself in any kind of extended form. By all indications from both players, it seems like it was a fairly calm meeting, as these go, with no tempers really flaring (like it seems they did for the Cavaliers during a recent players-only meeting). But the tenor of the meeting still doesn’t change that the Nets decided it was a bad enough situation – with the team now at 3-7 after losing five of its last six games – to hold one.

“It was just us amongst ourselves talking,” Johnson said. So what were they talking about? Johnson hinted at the answer when asked if Monday night’s was even more frustrating than recent losses because the Nets had jumped out to a lead after setting a season high for points in a quarter (40 in first quarter) and a half (63 in first half). “Yeah, that’s probably the biggest thing,” Johnson said. “We were riding pretty high and clicking offensively. We weren’t getting a lot of stops, but we had enough to where we had a double-figure lead, and we just blew it all away.” Johnson also said the word “chemistry” four separate times during his interview as he walked out of the arena, an ambiguous term that can mean a million things when it comes to how basketball players are fitting together on the court.

The few players who spoke after the meeting on Monday night hinted that the team is carrying some bad body language — guys get discouraged when shots don’t fall, and forget to play defense. This wasn’t supposed to happen to a squad that added Kevin Garnett and Paul Pierce in the offseason.

It’s still very early in the season, and Brooklyn has enough talent and veteran leadership to pull themselves out of this hole. But by the look of things so far, Nets fans have reasons to be concerned.