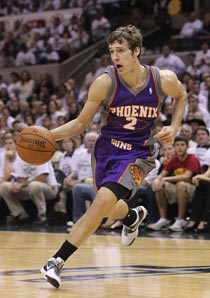 If you type “Goran Dragic” in Google, the first search term automatically generated is “Goran Dragic Game 3” — and rightfully so. I remember watching that game against the Spurs and, literally, couldn’t believe what I was seeing. I’ve been a staunch supporter of Goran during his time in Phoenix so I knew the guy could ball; but there isn’t a soul on the planet who expected him to drop 23 in

I caught up with Goran a few weeks ago after his unbelievable game to have him tell you the story in his own words.– Ben York

As told to Ben York

My second year in the NBA has been totally different than my first year. Last year, I didn’t play in many games. I lost some confidence and at times didn’t believe I was good enough for the NBA. When Alvin [Gentry] became the coach, he gave me a lot of opportunities and I started to play well. Now, I’m more confident and playing better, but I still know that I have to do so many things to improve my game.

For me, playing the Spurs in the second round was different than maybe what it was for Amar’e [Stoudemire], Steve [Nash] and Leandro [Barbosa], because I wasn’t here when we played them in the past. I knew that San Antonio has been so tough for us. At the same time, we knew that we were both different teams so we wanted to remain focused. We knew we could win the series and just wanted to play our game.

The first two games in the series I was struggling with my shot and couldn’t find my rhythm. Even though we won both and were up 2-0, we knew that San Antonio was not going to quit. They were going to come out strong at home and we wanted to play similar to how we played the two games in Phoenix.

Before Game 3 against the Spurs, I was talking to Alvin and he said, “Kid, be aggressive. Play your game and don’t worry if you make some mistakes.” I just listened to his advice. When I got in the game, I penetrated right away and ended up scoring. Then I hit a shot from the three-point line. After that, I just knew it was going to be a great day. When I made the 4-point play I felt that every shot I took was going in. The paint was open and it seemed that we could get whatever we wanted offensively. Even though we were up a lot at that point we continued to play the pick and roll against Tim Duncan. They were switching so we just tried to penetrate and find open shots.

It was great because we were 18 points down and we ended up coming back to win by 14, which was amazing. We know that as a team, if we are down, we just have to stay focused and at some point we’ll make a run.

Still, I can’t believe I scored 23 points in a quarter. I’m just really happy. I have to demonstrate that I can do that again and it wasn’t just a lucky game for me. I had 32 points against Utah earlier in the season but we ended up losing the game. This was different because it was a Playoff game and against the Spurs. It was a really special day for me and for my family back home in Slovenia. After the game, my teammates congratulated and joked around with me. Alvin came to me and said, “Kid, you see? Every game you can play like that!” The players were joking around with me, calling me Goran Jordan.

I’ve worked really hard and I’m just happy that it all came together and we won the game.