Suns Up, Marion Down 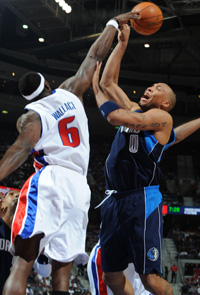 Apart from the warrior physiques of LeBron James and Dwight Howard — both of whom are apt candidates to single handedly defend the walls of Troy from the daunting Greek Army (with or without Trojan horse) — Shawn Marion has been the only other baller showcasing extraterrestrial athletic ability on the court.

At times, Marion looks like he’s gliding, floating a few inches off the hardwood – not burdened by human weaknesses like footwork and good defensive positioning. Armed with a goofy running posture, a gimmicky jump shot that always awkwardly found its way in the hoop, Marion was the heart of the run-and-gun Suns team from 2004 to 2007.

Steve Nash was the tactician, Amar’e Stoudamire (when available) was the flash but Marion was the soul, averaging 18.6 points, 10.7 rebounds, 2.0 steals, 1.5 blocks on 51.3 percent from the field for the Suns. Gaudy numbers.

Marion was supposed to be the key to Suns’ operation — fluidly transitioning from defending opposing guards, forwards and even centers on consecutive possessions. He spent more time on Tony Parker than any other Sun, hounded Dirk Nowitzki on the perimeter, combated and topped Lamar Odom’s positional aloofness on both the defensive and offensive end – truly unique deeds, unmatched by anyone else in this generation. Yet, he was traded for a player who was brought in to guard a single player – Timmy Duncan.

Marion’s departure, as much as Shaq’s arrival, represented the end of an era for the Suns. The paradigm shift from fluidity to rigidity was supposed to be end of the fast-paced Suns and the elevation of Marion’s career from a man in the shadows of Nash and Amar’e, to a primary option on another team.

One of the thesis’ in Jack McCallum’s 7 Seconds or Less was Marion’s sensitivity, his fragility and desire for external recognition and praise. The numbers and deep playoff runs weren’t enough; he needed to be told how good he was, appreciated, recognized, given game balls acknowledging his excellence.

The discontent culminated with Marion’s response to whether he would be willing to play for a weaker team if it meant greater appreciation. His response: “Wow, that’s interesting. I’ve never been asked that. That would be an interesting situation to be in, to really show people what I can do. But we’d be in the Playoffs, right?”

Marion got his wish. The Suns slowed down.

Since, the two parties have gone in completely opposite directions. The Suns dumped Shaq for nothing (by the way, a rejuvenated Ben Wallace would be a nice addition for this year’s Suns) and sped back up to a 14-3 record this year and Marion is playing for his third team in three and a half seasons.

The Suns weren’t supposed to work without Marion, but they are working, thanks to young replacements – Channing Frye and Jared Dudley — who have graciously replaced Marion’s offensive efficiency.

After a year hiatus the Suns haven’t missed a beat, replacing an expensive malcontent with two youngsters feeding off Nash’s surgical point guard skills. But Marion has sunk further int

o anonymity after being traded from Phoenix – the opposite of what he wanted.

This once again reiterates the importance of Nash but Marion was an all-star before he got there, albeit playing with Jason Kidd in his prime. Factoring in the system, age, injuries, change of sceneries — the statistical drop-off in Marion’s game is much too significant post-Suns to ignore. He’s not the player he was in Phoenix, but should his recently play impact his legacy?

In Phoenix, Marion was the best defender on one of the League’s worst defensive teams, was adored by fantasy basketball junkies, had one of the most unique games and skill sets in the game that were perfectly utilized by Steve Nash and Mike D’Antoni. Was Marion in the right place at the right time? A product of the channeled offensive chaos?

The system built around Marion’s gifts is working seamlessly without him, yet he’s not operating without the system (Note to Stoudamire: Stay in Phoenix). Far from getting the spotlight, Marion is experiencing something worse – he’s no longer playing above the hardwood but has landed so softly that it’s become difficult to recognize his game.

Pardeep Toor is the co-founder of It’s Just Sports where he gets philosophical about basketball. Follow him on Twitter.