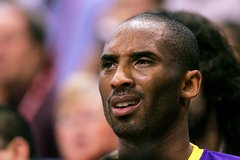 With Phoenix nursing a double digit lead midway through the second quarter last night, Phil Jackson had a lineup consisting of Sasha Vujacic, Lamar Odom, Brian Cook, Shammond Williams, and Maurice Evans on the floor. Even Doug Collins (who I’m almost certain is a Laker fan) came close to laughing at the absurdity of this decision. Me? I was punching myself in the throat. The Zen Master might as well have started waving a white flag from his seat. The game was over.

To save you (and myself) the pain and embarrassment, I will not rehash most of the details from last night’s carnage. The only thing we can and should say about game 2 is that the result was predictable. There was no way the Suns were going to allow themselves to travel to LA with a tied series. I just didn’t think the Lakers would be so accommodating. Six Suns players scored in double figures and – let’s be honest here – the Lakers simply did not show up.

A couple of questions:

1) Did Nash kiss his right bicep after a hard (and totally unnecessary) foul by Odom last night? If so, I hope Jack Nicholson puts out a cigarette in his eye before this series comes to an end.

2) Was anyone else secretly hoping that TNT would CGI some steam coming out of Kobe’s ears as he sat on the bench absolutely fuming when all hope was lost in the third quarter?

OK, time to stay positive…Deep breath…The Lakers will can win the next two games.

Yes, I’m perfectly aware that there’s no logical reason to believe what I just wrote in the previous sentence, but consider the following: The Lakers were 25-16 at home this year; game 3 is a must-win; the NBA would not be pleased with a sweep in this series; Kobe will most likely go off in the next two games; and even if I’m alone in this, I still believe, dammit!

Keys to game 3 (for the Lakers): A hot start. Lots of calls. Cold shooting from Phoenix. A Kobe explosion.

See you tomorrow night, everyone. I’ll be enjoying several adult beverages during the contest. I suggest you do the same.