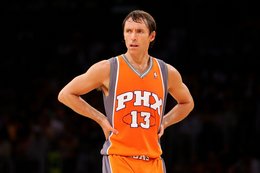 Thirty minutes before tipoff, Wifey walks into the room and asks me if I would like to tag along while she goes and visits a friend of hers in Montreal. I then look at her as if she has three heads. This, rest assured, did not end well. Unfortunately, this was just the beginning of a nightmarish Sunday afternoon.

After game 3, Steve Nash was upset with himself and his teammates for not having reacted well to the Lakers’s pressure defense. He promised that the Suns would find a way to exploit it, and boy, did they ever.

Instead of coming to a full stop whenever the Lakers would send two guys at him, Steve kept moving, and oftentimes he beat the double team and got to the hole for some tough finishes. He even found time in his busy schedule to kick Kobe Bryant on his way to the hoop. So crafty. And when the double forced him to give up the ball, he would inevitably find a teammate wide open under the hoop (usually Amare Stoudemire, who seems to enjoy inflicting all sorts of pain on the rim).

The Lakers were able to keep things relatively close early on due to hot shooting from Kobe and the Bryantaires. Everyone from Luke Walton, Kwame Brown, Maurice Evans, and Lamar Odom contributed in the first half, and it looked as though the game would be close down the stretch. In the second half, however, the wheels came flying off the wagon.

Kobe came out and had himself a solid first half but he couldn’t get himself going at money time. Phoenix threw everything but the kitchen sink at him; two to three defenders were consistently in his grill and forced him to give up the rock time and again, and the Lakers never threatened enough for him to put on the Superman cape in the fourth quarter.

What else can you say about Steve Nash? The only thing more impressive than his 23 assists is the simple fact that he could have easily gotten 30 of them had his teammates knocked down some of the jumpers they usually wet.

Time for truth: The Lakers, if they hoped to extend this series any further, had to win game 4. They were at home, they had solved Phoenix in game 3 (by pounding them inside and forcing Nash to give up the ball early in the shot clock), and they had to play desperately. They could not. They were overmatched on both ends of the floor, and the Suns’ superiority shone through.

Unless Nash, Amare and Marion get lost on their way to the gym, there is absolutely no way L.A. can go into Phoenix on Wednesday night and win game 5. This series, I’m afraid to say, is over.