The Outlet: Why The Hell Is There An MVP Debate?

Russell Westbrook’s case for the MVP award shouldn’t even be a debate. Just as it shouldn’t have been in 1962 when Wilt Chamberlain inexplicably lost the award despite averaging over 50 points and 25 rebounds per game. 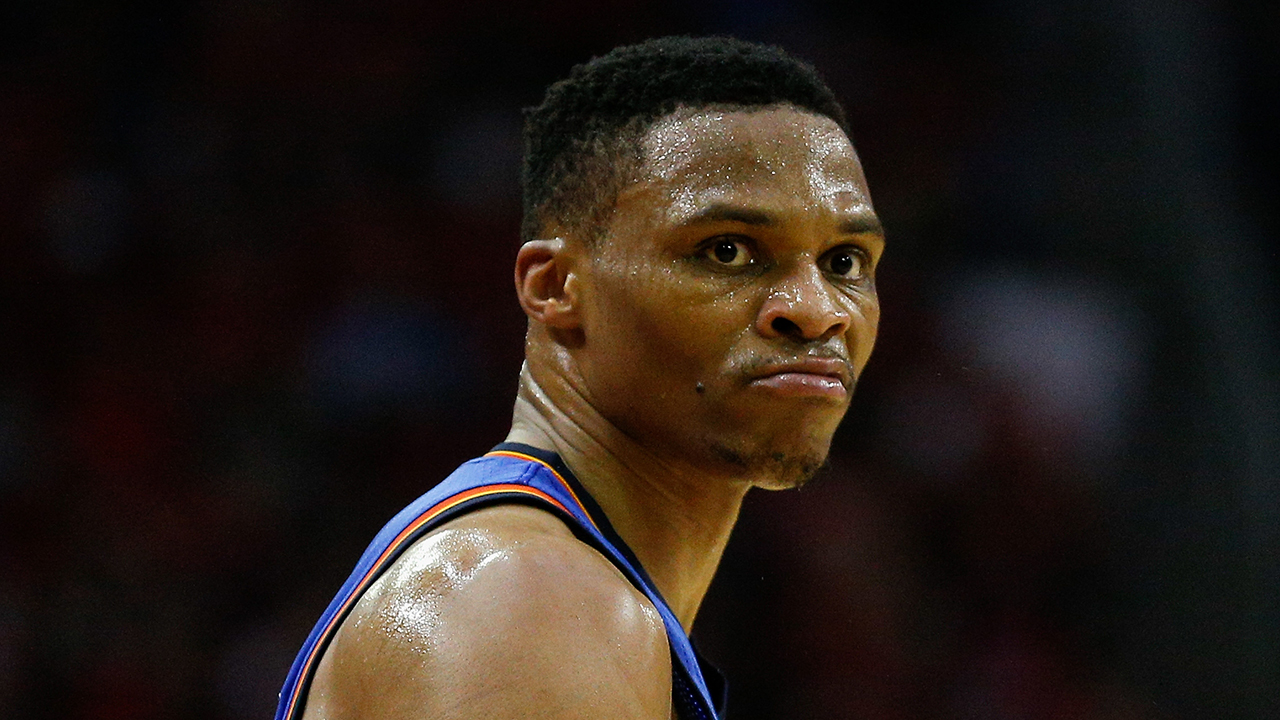 Ben Collins is a brilliant writer, a dogged reporter and a Senior News Editor at The Daily Beast. Oh, and starting now, he’s also a SLAM columnist. Introducing The Outlet, a monthly column in which BC muses on…well, whatever he wants. Enjoy. —Ed.

Fifty years from now, when your self-driving car casually plows through a half-dozen jersey barriers and into a bridge stanchion while you’re flipping around Basketball Reference, you will exit the remains of your TeslaFord 27 Coupe Presented by Starbucks™ and you will be furious.

You’ll have been looking at Russell Westbrook’s 2016-17 stats and there will not be the appropriate technology to explain why a 2017 MVP debate even existed.

You don’t have to imagine it. That page is there right now with Westbrook’s entry. The stats that break the little Excel sheet on the website, the 31 ppg, the only guy in a half-century to average a triple-double.

The YouTube videos are there, too, where Russ glides like a beautiful, maniacal, a-hole raptor for dunks and rebounds and loose balls. Like Mothra, but benevolent. He just simply cared more the whole time. It won’t make sense. You will look back and not be able to figure this out.

Then you’ll remember that we made some, um, precarious decisions when it came to voting in general around that time and settle on that. But that won’t be it. Just as it wasn’t the whole story in 1962.

That was the year Wilt Chamberlain dropped 100 points in one game and only had a piece of paper to show for it. He averaged 50.4 ppg and 25.7 rpg, and everybody thought it was a trap.

“At the time, the sense among the public was that this was all sort of inflated, that basketball was out of control,” Aram Goudsouzian tells me.

That “inflated” word feels familiar. Have you seen the prosecutorial YouTube videos with Russ seemingly lurking for rebounds? Have you had the misfortune of hearing an old white guy on talk radio scream about how his style of play could never win?

You guessed it: This is not new!  Goudsouzian wrote a book called King of the Court about Bill Russell, and a too-thorough piece of academic paperwork called “Can Basketball Survive Chamberlain?”

“The sport was being associated with blackness for the first time. This was read more as like a threat than anything else,” Goudsouzian says. “There are all these articles that came along with it about how to reform basketball. They wanted to make the goal 12 feet tall. They wanted to get rid of the backboard.”

Russell, who averaged 18.9 ppg and 23.6 rpg while playing along six Hall of Famers, won the MVP. He was also in the dead center of an eight-year run as an NBA champ.

“A lot of it was rooted in racial threat. Wilt was seen as this big black guy ruining basketball,” Goudsouzian says. “Ironically, Bill Russell was viewed as the other side in this story, when he wasn’t. He was a champion for civil rights.”

Russell was invariably rewarded for dominating within a system and Wilt, who did a bunch of things no other human will ever do again, was relegated to second place. Gotta appreciate playing the right way. Am I right, dudes with a podcast and a fistful of stats who have clearly suffered no true hardship?

Well, we are in Wilt Chamberlain’s future now, the unfortunate one where no one wears white suits or red velvet pants like him, and I’m here to tell you this: The system can go to hell.

“To me, it’s about, Who captured your imagination?” Goudsouzian says. “What Westbrook did is outside the bounds of space and time.“

Russ was a supernova. There is no future in which a supernova isn’t good enough.