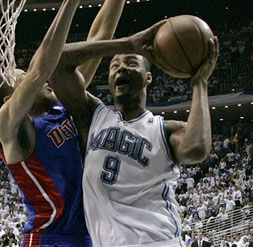 The MVP Coronation game notes are coming in a little while. Obviously Lang getting our logo and a shout out from Ernie Johnson is the news of the day, (plus Charles Barkley finally getting something right!) but I should mention the Magic-Pistons game. How predictable was it that the Pistons wouldn’t grab the series by the throat?

From Mutoni’s latest “Worthy of Your Attention”:

Pistons @ Magic, Game 3: This one has all the makings of a classic Detroit letdown game. I can see it now: The Pistons, who have been in control of the series, arrogantly strut into Dwight’s house, give a half-assed effort, and let the Magic win a game. Afterwards, Rasheed dismisses the loss in typical ‘Sheed fashion, and everyone has a good laugh because, well, this is what Detroit does.

Throw in a first quarter injury to Chauncey Billups, and Detroit was ready to pack it in early. Rashard Lewis, who signed a mega deal that had many people scratching their heads because of its maxness, came through with the best playoff game of his life, 33 points while hitting 5 of 6 threes in an easy 111-86 win.