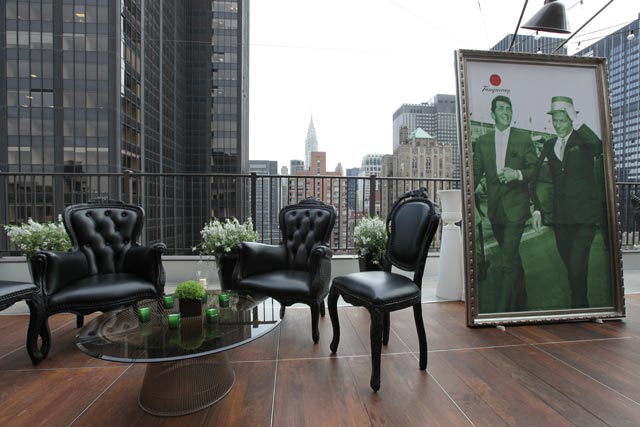 I won’t front, there are a lot of perks to working for a publishing/media company. Free magazines, press credentials and every so often, hopefully consistently for this young writer, invites to swank parties where the food is fresh, the alcohol is plentiful and the venue is enticing. Take last night, for example.

Charles Tanqueray’s 200th Anniversary Party at “Upstairs,” the rooftop lounge at the Kimberly Hotel on the east side. T&Ts all around, DJs doing their thing and a spectacular view of M

anhattan. Of course, since this is a basketball publication, the pound-for-pound best in the game at that, there has to be some inkling of basketball relevance for us. OK, Tanqueray and the great people over at TaylorPR have David Lee available for interviews. Game on.

SLAM: You’re on the preliminary roster for the World’s (Basketball Championship) this summer, are you hoping to make the team? Do you want to go to Istanbul?
David Lee: Absolutely, I’m excited about that. Hopefully the whole contract stuff will be taken care of before we go do that, but it’s really exciting and along with being an All-Star and winning a championship, having a chance to play in the World Championships and possibly the Olympics and represent your country, I don’t think there’s anything much more exciting than that. So, it’s a great opportunity.

SLAM: Yeah, especially with a lot of the bigger stars saying they’re not going to play at the World’s for whatever reason, there’s a lot of opportunity for the power forwards and the centers like yourself. Do you think you’ve done enough to warrant a spot on that team?
DL: Well that’s not for me to decide. I’m going to go out there and be in great shape and try out and play hard and play my game and hopefully I can contribute to them helping them win. That’s what’s most important to them, winning world championship’s this year and if I’m good enough to make the team, I guess I will. If I’m not, I won’t.

SLAM: …and I was asking him, because you guys were with Nate (Robinson) all season, and whether he deserved the benching he got from D’Antoni or not, what’s it like watching him play in the Finals and having such an impact that he’s having right now?
DL: Well you know what, Nate’s a guy that’s…I’ve played with him for five years. He’s a friend above all else. To see him have a chance to be on this stage is really cool. I almost feel like I’m sorta there with him a little bit, just because we came in together in the same class. He’s a guy that’s, a perfect a guy to bring off the bench like that because he can impact the game in a short period of time. And when he’s hot, I think really for the most important rounds being the conference finals and the Finals, he’s already had one game in each of those rounds and I think he’s been kind of the MVP of that game. He’s a guy that you can not play him that much for two or three game

s and bring him on in the fourth game and he still makes a great impact. It’s not like he gets down on himself, so he’s a very resilient kid and he’s helped them a lot in these Playoffs.

SLAM: I know you’ve heard this a lot all summer because you’re a free agent, but do you want to come back to the Knicks?
DL: I do, I love it here in New York. I love my time here. This point though, it’s a little bit of a business and we’ll have to see what happens. There’s a lot of factors and the biggest thing is what LeBron and DWade and those guys decide to do. All of us…

Right in the middle of his sentence, a waiter drops in.

Waiter: Can I interest anybody? [Offering a tray of tuna sushi]
DL: Yeah, I’d love one. Awesome. Would you (me) like one?
SLAM: Of course.
DL: First time during an interview I’ve been offered sushi. I like it. I think, um [still chewing], that’s the biggest thing — what those guys are gonna do. And all of us are gonna react from that.

SLAM: [Still chewing myself] This season you featured more of your mid-range jump-shot. A lot of people started comparing you to Chris Bosh. Are you close with Bosh? Do you have a good relationship with him?
DL: I’ve only met Chris through the Olympic stuff in the summer and playing against him. We definitely have respect for each other’s game, we’re cordial to each other. I don’t know him overly well. That’s a huge honor. Guy’s a great player and an All-Star year in and year out. I’d like to think when we play against each other we compete against each other real hard. Stats are usually similar, sometimes he gets the better of me, sometimes I get the better of him. He’s a great player. As far as my jump-shot, my goal is to improve each season. And that was one of my glaring weaknesses. I wasn’t able to shoot the mid-range shot. I can’t tell you the amount of hours I put in this summer and the couple of off-seasons to get better at it. It was just great to be able to showcase it in a game and I think I made it in to one my strengths.

SLAM: It’s definitely showed on the court, you probably got your All-Star nod because of it. What do you think of what Prokhorov’s doing with the Nets?
DL: It’s an interesting situation, I mean I don’t know much about him other than what I’ve seen on 60 Minutes like everybody else. I think he’s similar to when Mark Cuban became an owner. He’s bringing a lot of interest to their situation. And I think he’s bringing a lot of enthusiasm to his position and that’s all you can ask. He comes in with enthusiasm to own a team and that’s an exciting time for the New Jersey franchise.

SLAM: Alright, thanks man. That’s all I’ve got for you.
DL: No comments on have you been to West 4th St and have you seen that new guy that can dribble the ball off his…