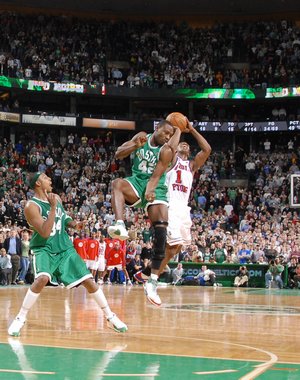 Last night’s Celtics/Pistons game lived up to the hype; it was an outright war that came down to the game’s final play. Everyone saw Chauncey Billups cooly hit the game-winning freebies after faking Tony Allen out of his shoes, but did you know that it was all Tayshaun Prince’s idea?

Interestingly enough, it was Tay – a guy who, statistically speaking at least, didn’t have that big of an impact during the contest – who more or less decided the outcome of the ballgame.

“Tay told Chauncey to give Tony Allen a pump fake because Tony was just coming in off the bench cold,” Pistons coach Flip Saunders said.

Billups confirmed the story, saying Prince gave the same message to Richard Hamilton knowing that one of the two was going to end up with the ball in his hands for the final shot.

Tony, perhaps unfairly, is being scapegoated this morning, but some of the blame has to fall in Doc Rivers’s lap for his decision to go with Paul Pierce on the game-winning attempt instead of a scorching-hot Ray Allen.

Whatever the case, until Boston proves otherwise, the East still belongs to Detroit.