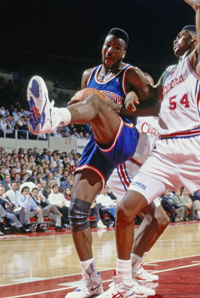 Anybody who remembers the seemingly immortal Charles Oakley knows he was one of a kind, not just as a basketball player, but as a personality. In a league where marketability, character and stock have been the buzz words for gauging if players are “doing the right thing” to earn and maintain their economic and professional worth, Charles Oakley was and still is a man who sought to be himself and without regret or failure.

Being a gymrat and lay fitness trainer and adviser, I asked Oak about h

is dietary habits and fitness regimen, thinking he’d spare me a few moments of his time to give me a few tips. Seeing him these days, be it on TV or in pictures, you have to look at him and think he’s still really capable of doing something in the NBA today–maybe not 20 minutes a night (more like 10 minutes or so, sure), but he could definitely get some legitimate court time. In short, he looks great at a time when a seeming majority of retirees in their 40s look like they’ve decided to live at the neighborhood buffet for rest of their bright, sunshiny days. Gracious as the man is, he not only gave me some valuable tips, but he also extended to me the opportunity to interview him–the following bit is that very session.

SLAM: To stay around in the NBA for 19 years and be a wholly productive power forward for elite teams like the Chicago Bulls and namely, the New York Knickerbockers, I’d be a fool not to think that a high level of fitness isn’t required. Can you tell a bit about what you did from a weight-training and cardiovascular perspective during your heyday?
Charles Oakley:
You always have to be in shape, no matter what you do in life. Some things I did with the team and some things I did on my own. I would say about 80 percent on my own. I pretty much do the same thing now as I did then, I just don’t spend as much time doing it. One hour max. It’s about balance and maintaining.

SLAM: What were the various teams’ programs like? Did they differ much?
CO: Chicago – A lot of outside workouts. Gravity, jumping on/off boxes, sprinting, games, etc.
New York – More weight work, lifting, legs (New York played a different style of ball).
Toronto – A lot of [resistance] band work, like pilates.

SLAM: When did you first really dedicate yourself to your fitness preparation?
CO: Freshman year, Virginia Union – I worked out with the football players.

SLAM: A lot of people who see you these days seem t

o be in awe of your great shape, and often I hear about how various people who have seen you in person seem to think you can still play in the NBA—what’s your routine been like in the six years since you left the League?
CO: I workout four times per week, one hour max. Walk between sets. I jog when I’m home and sometimes when I travel. I eat my own cooking. Stay busy. When I eat out, I eat bad – like everyone else – you have to have balance. When I cook – which is often – I cook healthy. Drink a lot of water.

SLAM: It’s also no secret to fans (but many people still don’t know) that you are a bit of a master chef? What are your favorite meals to prepare?
CO: Favorite meal is FISH — sea bass with fresh pineapple, potatoes (not mashed) and steamed broccoli and/or asparagus…but my favorite vegetables are collard greens and zucchini.

SLAM: With almost any fitness plan, diet is hand-in-hand in really maximizing your body’s potential, I’m sure that hasn’t been lost in your life as an athlete—what sort of things have you made a point in eating for your nutrition, and also, what sort of things have you been eager to abstain from?
CO: I eat pretty much whatever I want, but you can’t expect to eat steak two or three times in a row and have your body stay in shape. I don’t really like to try new foods these days. I’ve tasted so many different foods from around the world. My palate is on hiatus from new stuff. I think if you stick with grilled or baked chicken or fish – you should be in good shape. You can’t have beef laying in your system week in and week out. That’s definitely not good. Plus, I eat a lot of vegetables.

SLAM: You’ve been listed at 6-9 and between 245 and 260 pounds, depending on the years you played. You’re a pretty buff guy, but with all the running that happens when you’re a starting forward in the NBA — you’re bound to run several miles each time out — how did you keep your weight where you wanted it?
CO: I eat good. I know my body very well. I know my intake. I know what will make me lose weight and gain weight. Every now and th

en, when I feel heavy – I’ll do an extra mile just to keep it tight. I have a very healthy appetite just from playing, so I’m not gonna lose weight. Bottom line is – you gotta get your whole body moving to keep your joints lose. Walking, stair steps, bikes. Whatever. I like to keep it moving.

SLAM: Ben Wallace of the Detroit Pistons is someone you mentored as he came up as a youngster, all the way into the League, and he’s an Adonis. Did he get his work ethic in the weight room from you as well? How do you think he projects next to you—was he an equal in that aspect of preparation or did you always have a leg up on him there?
CO: I don’t really know how to answer that question. I don’t look at it like, “Do I work out and prepare better than Ben?” Ben has a big body for his size and he’s very muscular. At VUU we only had a bench press and a leg press. That’s why I worked out with the football players – I would sneak in there and do my thing. I knew what had to be done, and nobody was gonna stop me from getting it done.

SLAM: I, myself, am big into fitness, with particular interests in weight training and cardio exercise. How do you feel about the use of over-the-counter supplements, such as vitamins and protein shakes?
CO: I’m not big on vitamins. But you don’t know what can help you ‘til you take it. I’m not saying they don’t work – I just never noticed a difference for me. Protein shakes don’t really do anything for me. When I played I didn’t really take anything. Now, every now and then I will eat a protein bar. I don’t really know if they are helping my muscles, but some of them taste good.

SLAM: With steroids becoming an issue in modern sports and with the drugs that are used today being so complex, how likely do you think that league guys are actually using them for

SLAM: Given everything you know about your career and how you went about playing and keeping fit while in the NBA, is there anything you would have done differently, from a fitness point of view, to improve your body and your performance?
CO: I wish I would have stretched more and done more cardio. I’m very flexible now. Maybe if I stretched a little more, I might have been able to jump a little higher.

(An extra special thanks to Charles and Shanee Williams for their time and contributions to this interview.)

Sandy Dover is a novelist/writer, artist and fitness enthusiast, as well as an unrepentant Prince fan (for real). You can find Sandy frequently here at SLAMonline, as well as at Facebook, Associated Content and Twitter.