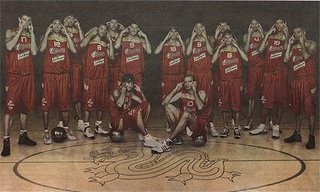 Following days of mockery, faux outrage, and general confusion from the rest of the world, you’d think that the Spanish hoops team would’ve realized by now that, no, it’s not okay to strike a highly offensive and blatantly racist pose (one that stopped being funny around the sixth grade) and make it your team picture.

Worse still if you’re offending just about everyone in the very country you’re about spend a couple of weeks competing in.

And of course, you’d be wrong. The guys on the team don’t really think they did anything wrong.

“It was something like supposed to be funny or something but never offensive in any way,” Spain’s Pau Gasol, center for the Los Angeles Lakers, said. “I’m sorry if anybody thought or took it the wrong way and thought that it was offensive.”

“We felt it was something appropriate, and that it would be interpreted as an affectionate gesture,” Calderon, who plays for NBA’s Toronto Raptors, wrote on his ElMundo.es blog. “Without a doubt, some … press didn’t see it that way.”

You stay classy, Spain. And best of luck to you in your bid to have Madrid host the Olympics.