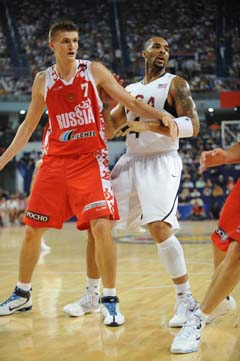 Team USA went 5-0 on its pre-Olympic exhibition tour, outscoring their opponents by an average of 106-75 while shooting .616 from the field, .413 from three point range and .700 from the free throw line. Team USA enjoyed a 1.4 rpg advantage and a 6.4 differential in turnovers per game. Overall, Team USA did well, but the final two games – especially a contest with Australia that was competitive deep into the second half –undoubtedly provided some hope to the other medal contenders that it is possible to beat this squad.

Here are individual grades for each Team USA player, listed in order of minutes played (a statistic which, as I noted in a similar post about last year’s FIBA Americas tournament, provides a glimpse into Coach Mike Krzyzewski’s evaluation):

LeBron James (25.8 mpg, 15.3 ppg, 4.0 apg, 4.5 rpg, 12 steals, three blocked shots): James led the team in steals, ranked third in scoring, third in rebounding and third in assists while shooting .667 from the field. He missed the first game of the tour due to a sprained ankle but has shown no ill effects from that injury. The only blemishes on his performance are a team-high tying 10 turnovers and his 6-11 (.545) free throw shooting, though the small number of free throw attempts (sixth on the team) suggest that perhaps he should be attacking the basket more frequently. James is one of four players for whom I tracked the team’s net scoring when he was in the game; Team USA outscored the opposition by an average of 14 ppg when James was on the court.

Grade: James deserves an “A” for his great all-around numbers.

Kobe Bryant (23.0 mpg, 13.4 ppg, 3.6 apg, 2.2 rpg, 11 steals, one blocked shot): Bryant ranked fourth on the team in scoring, fourth in assists, second in three pointers made and tied for second in steals. He accepted the challenge of leading the charge defensively by guarding the toughest perimeter player on the opposing team; the disruption that he caused created transition scoring opportunities that are vitally important because Team USA is still not great at half court execution in FIBA play. Team USA could possibly have lost to Russia and very likely would have lost to Australia without his defense at crucial moments when the outcome of those games hung in the balance, while the other three games were blowouts in no small part due to the way Bryant took out whoever he was guarding, thereby wrecking the opposing team’s offense. Team USA outscored the opposition by 17 ppg when Bryant was on the court, easily the best figure among the four players whose numbers I tracked in this category.

Grade: Bryant deserves an “A” for his defense alone and all of his other contributions are gravy.

Chris Paul (21.8 mpg, 7.4 ppg, 5.4 apg, 2.4 rpg, three steals, zero blocked shots): Paul led the team in assists despite not starting a single game. He was very sharp offensively but he frequently struggled on defense. He padded his assist totals in the first three blowout victories (7.0 apg) and was noticeably less productive in the final two games against tougher opposition (3.0 apg).

Carmelo Anthony (21.0 mpg, 15.4 ppg, 1.8 apg, 5.2 rpg, three steals, two blocked shots): Anthony ranked second on the team in scoring, tied for first in rebounding and easily led the way in free throws made (21) and free throw percentage (.955). Anthony is a pure scorer who is capable of making his presence felt on the glass but he forced shots, did not pass the ball very well and attempted the third most three pointers but shot just .250 from long distance. Then, of course, there is his defense–point blank, it is not very good: Anthony loses sight of his man far too frequently, does not rotate when or where he should and generally seems much more interested and engaged at the offensive end of the court–particularly when he has a chance to score–than at the defensive end of the court. Team USA outscored the opposition by 12.2 ppg when Anthony was on the court–and on several occasions the team made game changing/game deciding runs when he was on the bench.

Grade: A lot of people rave about Anthony as a FIBA player but they are just looking at his scoring; he deserves no more than a “B-/C+.”

Dwyane Wade (20.2 mpg, 18.0 ppg, 2.4 apg, 3.0 rpg, 11 steals, one blocked shot): Wade led the team in scoring, tied for second in steals, posted the best three point shooting percentage among players who attempted at least five three pointers (5-7, .714) and ranked third in field goal percentage (.723), trailing only two bigs (Dwight Howard and Chris Bosh) who scored most of their points on room service dunks. Wade started the first game when James sat out and then Wade provided instant offense off of the bench in the next four games.

Grade: Wade deserves an “A” for doing everything that has been asked of him.

Deron Williams (20.2 mpg, 6.4 ppg, 5.0 apg, 2.0 rpg, seven steals, one blocked shot): Williams ranked second on the team in assists. He did an excellent job of breaking down zone defenses with dribble penetration, using his strength and ballhandling skills to create passing angles. His defense was solid and he committed fewer than half as many fouls as Paul in virtually the same amount of playing time.

Dwight Howard (20.0 mpg, 10.0 ppg, .4 apg, 5.2 rpg, eight steals, five blocked shots): Howard ranked fifth on the team in scoring, tied for first in rebounding, led the team in blocked shots and ranked a surprising fourth in steals. He shot .759 from the field, with the vast majority of his makes coming on dunks and layups. Howard provided a presence in the paint at both ends of the court while playing exactly the number of minutes that I expected him to receive; the only negative aspect of his performance was abysmal free throw shooting (6-18, .333).

ranked just ninth in field goal attempts, which either means he should be shooting more often or this is too small of a sample size to be meaningful. Bosh was the first big off of the bench and his defensive versatility proved to be valuable in several situations; Howard is best suited to guard back to the basket post players—a rarity in FIBA play—while Bosh can guard post up bigs, face up bigs and even some wing players.

Michael Redd (12.8 mpg, 9.6 ppg, .3 apg, 1.6 rpg, one steal, zero blocked shots): Redd led the team in three pointers made (12) and attempted (24), numbers that are inflated by his 6-8 performance in the blowout win over Canada. His one and only job on this team is to make open three pointers.

Grade: He deserves a “B” and will not merit a higher grade unless/until a greater percentage of his production takes place when the outcome of the game is in doubt.

Jason Kidd (12.8 mpg, 1.0 ppg, 1.4 apg, 2.0 rpg, five steals, one blocked shots): Kidd started every game but has spent most of the time watching Paul and Williams be groomed to take over in future FIBA events. Team USA outscored the opposition by 9.2 ppg when he was on the court, which is actually fairly impressive considering his limited minutes.

Grade: Kidd is getting killed by a lot of commentators right now but I expect that his playing time and production will both increase in the games that count and for that reason I give him an “I” (incomplete) for now.

Grade: The only fair grade for him is “I.”

Carlos Boozer (7.5 mpg, 3.5 ppg, 0 apg, 2.0 rpg, one steal, two blocked shots): I expected he and Bosh to evenly split the 20 mpg when Howard is out of the game but Bosh has moved ahead of Boozer in the rotation.

Grade: No grade other than “I” is realistic.

These moves are unquestionably a significant upgrade: Stoudemire put up solid numbers but Billups and Miller were notably unproductive, while Chandler only played in garbage time situations. In contrast, Wade is an important member of this squad, Paul finished second in last season’s MVP voting and the combined production of Bosh and Boozer will outweigh what Stoudemire and Chandler offered.