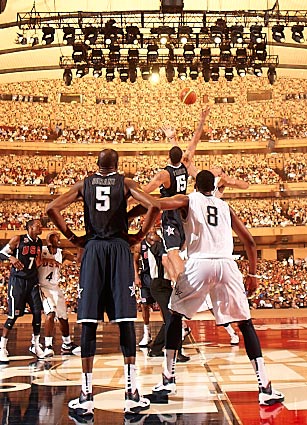 Team USA continued its march to Istanbul with its third day of training in New York City late yesterday evening, albeit in a very particular way. Nike’s World Basketball Festival kicked-off its four-day event with a special Team USA showcase at Radio City Music Hall. Yes, there was a regulation sized FIB

A court built on the stage.

“Literally, we played on the big stage tonight,” Lamar Odom says. “I think it was different. The ambiance, the background — as far as shooting the ball — but it was fun.”

It should have been fun for the Lakers forward (13 points, 2 threes in 18 minutes), who, along with Andre Iguodala (leading scorer with 15 points and 6 rebounds), shined the brightest when the lights came on. In two, 12-minute periods Team USA held an intra-squad scrimmage that was tied at the end of regulation sending it to an unprecedented, first-team-to-score-wins overtime. The Blue Team walked away victorious courtesy of a Rajon Rondo alley-oop to Tyson Chandler.

It was an ugly game, marred by too many attempted three-pointers (combined 7-36), missed jumpers (combined 39-92) and sloppy ball handling (27 turnovers in 24 minutes). Then again, it was just a practice, played under very unusual conditions. There was an open audience to the left of the court, while a curtain and enormous jumbo-tron stared at them from the right. Over the past two scrimmages against the USA Select Team at John Jay Criminal Justice, Coach K and his staff had focused on pressuring the opponent high up the court, working in some zone, which they utilized for all of two minutes yesterday, and building chemistry on the court.

For the most part, the battles for the 12 roster spots are near an end. As last night showed, Billups, who logged the most min

utes of any guard, will most likely be the veteran point starting along side either Derrick Rose or Rajon Rondo. With the way Stephen Curry has been shooting the ball (4-10 from three last night; three coming in the second period) all week, he could be the first guard off the bench. Perhaps this edges out Eric Gordon of a roster spot, who has been productive during practice, although not quite at Curry’s level.

Odom showed last night his value to this team, doing a bunch of little things to be productive. Knocking down threes, driving to the hoop, and being a lengthy body on defense. The swingman positions seemed to be locked down by Iguodala, who was very impressive and has been all week, along with Durant, Gay and Granger, who returned to practice after sitting out Day 2 with a dislocated finger. This perhaps pushes Jeff Green out of the picture.

The center position is the most intriguing — and confusing — spot to predict. Tyson Chandler will surely have the five spot wrapped up, although in 21 minutes out of a total 24 yesterday, he grabbed just two total rebounds while the opposing team shot 19-46. JaVale McGee continues to show his inexperience, losing his footing on one play and unnecessarily throwing the ball at the rim. The thing about McGee, though, is do you bring him to Turkey just for insurance? He’s the only other legitimate center besides Chandler, but his skill level and mindset don’t seem to be what Team USA is expecting at this level. Then again, if Chandler goes down in an early game, who does Coach K use? Odom? Love? They’ll have to go even smaller than they expected, something that will surely hurt them on the glass. Jerry Colangelo said yesterday they could potentially bring all 15 to Turkey, before they submit their final roster, and make their decision then.

It’s difficult to judge everybody when they’re only playing against themselves, so their exhibition on Sunday against Team France should be a really telling analysis of where they stand. See you then.