“The Absence of Evidence…” 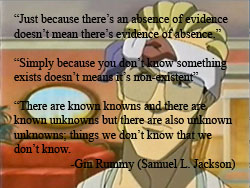 When I chose “Man in the Middle” as the name of my original Slamonline blog/column, believe it or not, I wasn’t trying to forecast the name of John Amaechi’s book. I thought it fit for two reasons.

1) The basic reason: The way Ray Clay used to say it during intros in the Jordan era was epic. It took a back seat to “At 6”6, from North…Carolina” as it should have, but that doesn’t mean it wasn’t great. And, to be perfectly honest, I have Bill Cartwright’s elbows and I felt the need to pay tribute to the fact that the only way I could conceivably kill someone is by throwing an elbow. (Note: I wrote “conceivably” because I’m a something of a pacifist, one of the many reasons it never truly worked as a baller. “Oh my Gosh, I just accidentally nailed you in the face. Are you okay? Let me get you an ice pack!”)

The cynic in me also wanted to pay homage, if ever so subtly, to such life-altering pivots as Dalibor Bagaric, Dragon Tarlac, Duane “splinters” Schintzius and Olden “The impersonation” Polynice. (Note: When you look at ‘Polynice’ linguistically, Poly is a prefix that means “many” and nice is an adjective that means “good at basketball.” So if you were ever simultaneously wondering how Olden Polynice did it, and ‘what’s in a name’, there you go. I also just realized I should have re-named my small slice of Slamonline “Golden Polynice.” This is going to bother me for at least a half an hour.)

2) The deep reason: I had always meant to write a really long post about this, but never got around to it. I faced a decision—or so I thought—when I entered the real world a year and a half ago: Was I journalist or a blogger? I’d just spent three years writing whenever possible for the best basketball magazine on the planet and contributing to their website by periodically driving two hours each way, to and from Cleveland from the middle of nowhere, all for the love of the game and the love of writing. This didn’t settle anything. I had done blog stuff, mag stuff, and some basic journalism, too. If anything, my Cleveland experiences showed me how much fun basketball and words could be when combined with ridiculous amounts of caffeine.

But this was the real world, where the fun was supposed to stop. So I did the stare at people drowning in their Cobb Salads thing for a year, wrote more for SLAM and just accepted that, as far as stereotyping the specificity of the career I wanted to pursue, I was without a defining identity, caught between a medium that was starting to burst at the seams and another—that The Wire so beautifully illustrates—is struggling mightily. I just didn’t tell anyone that I was confused.

It’s important to understand this in the proper context: before the Gilbert revolution there was a lot of divisive, bipartisan BS between bloggers and journalists; a lot of the same stuff that drags politics down was having the same effect on the sports mediascape of that specific time. There was this whole, “either you’re with us, or you’re against us” vibe that made my career-wavering all the more acceptable in my eyes. Thankfully, it’s improved some. Journalists have blogs, bloggers write for newspapers, etc.

It occurred that the best thing to remedy my indecisiveness would be to stand for something. It’s cool to be young and unsure of where life will take you, but it’s also good to have a little bit of self-defined direction. So I thought about what I stood for. While I love to joke and analyze and occasionally shoot straight, the best thing I could think of was thinking, critical thinking. I’m a thinker. I think outside the box, inside the box, inside of boxes (most notably, my apartment), while breaking boxes (literally—although that’s a story for another day).

Along those lines, I was thinking about what critical thinkers could define what I’m about as young adult with a liberal sense of humor.

Enter Gin Rummy and Ed Wuncler from The Boondocks. In this scene, you have a on-the-cartoon-surface white gangster voiced by Samuel L. Jackson taking something originally said by former Secretary of Offense, Donald Rumsfeld, and flipping it by a) making it awesome instead of horrible and b) pontificating about, “known knowns, known unknowns, and unknown unknowns,” all while reprising a mini-tribute to the, “say what again!” scene from Pulp Fiction. It’s complex, thoughtful, head-spinning and awesome all at once.

The following video (NSFW) is the inspiration for the banner you see above:

As the potential three way deal between Dallas, Portland Jersey and its subsequent coverage proves, most of the time we (the media, in general) act like fools pretending that we know something, when we simply fail to realize that we don’t know (this is because we don’t know…). Get it? Got it? Good.

Speaking of unknown unknowns, who, other than the requisite folks from the Lakers and Grizzlies, saw the Gasol to LA–or Shaq to Phoenix–deal coming? Nobody knew about it, and thus nobody had any idea that they didn’t know.

Just because there was an the absence of evidence that Gasol was going to the Lakers didn’t mean there was evidence of that deal’s absence.

I repeat: The absence of evidence is not the evidence of absence. Learn it. Live it. Love it. Flip it.