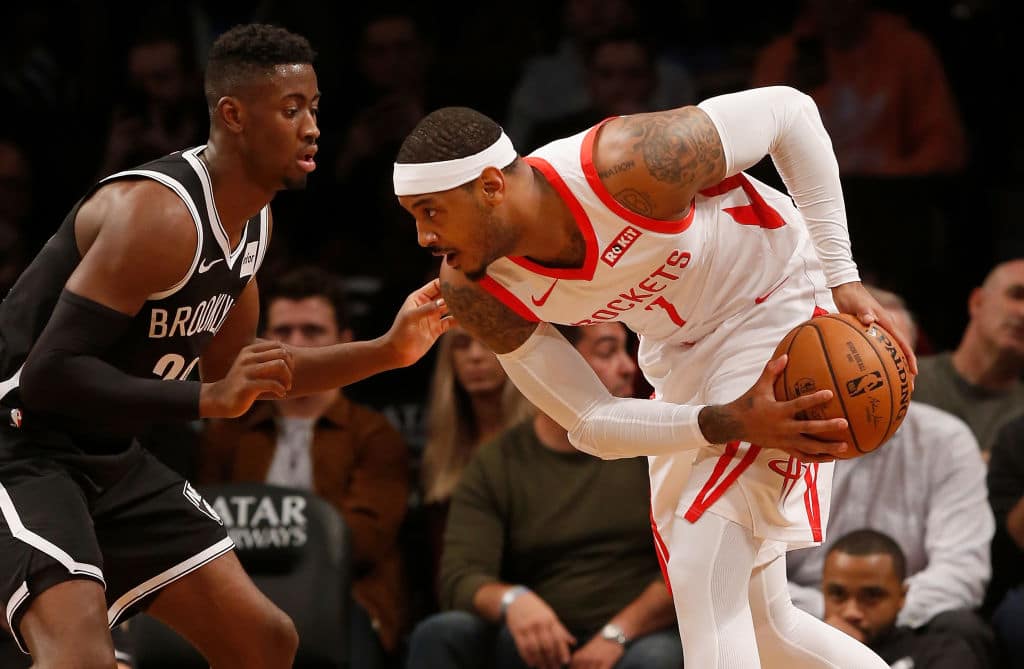 Basketball fans, players, and the media alike have welcomed a much-needed break after a whirlwind July. It’s hard to recall a busier offseason than the one we’ve seen here in 2019 but even with all of the names that have already changed teams, there’s plenty of individuals that remain available.

At this point in the summer, the number of teams able and willing to offer more than minimum contracts is slim but that doesn’t mean squads aren’t interested in fortifying their rotations with affordable but experienced assets.

Below is a list of the top remaining players available to ink deals with new teams, I’ve ranked them in the order of the potential impact they could still have on an NBA roster.

There’s been no shortage of criticism for Carmelo Anthony and some of that criticism is justified. That said, the 35-year-old remains one of the most offensively gifted isolation players available in basketball.

If Anthony is truly ready to accept a bit role, he could be a major asset to a contending NBA squad. He may not be capable of providing plus value as a starter or even as a sixth man in today’s NBA but you know as well as I do that a dialed in Melo could get hot at just the right time and move the needle in a pivotal 2020 postseason matchup.

The question is what kind of team he’d do that for.

Joakim Noah didn’t put forth the same statistical outbursts as some of the other players below him on this list did but I’ve ranked these players based on their potential impact on an NBA team in 2019-20. At 34 years of age, Noah’s game is more or less a subdued version of what it always was; a poetic blend of intelligence and rabid energy.

There’s not one team that wouldn’t benefit from an experienced, smart, defensive-minded rotation big like Noah and the former All-Star seems to have finally adjusted to his new reality, post-Chicago.

Noah is reportedly being hounded by a club in New Zealand, so NBA teams may not be able to grab him if they wait until the season is underway.

Kenneth Faried was a revelation for the Rockets when they signed him mid-season last January. The 29-year-old immediately began stuffing the stat sheet just as he’d done for so long with the Denver Nuggets earlier in his career and averaged 13.5 points and 8.8 rebounds in games in which he saw at least 20 minutes of playing time.

Faried’s production dipped when Houston welcomed an injured Clint Capela back into their rotation in late February but he remains a productive big that no longer comes with an eight-digit price tag.

Although he never averaged more than 20 minutes per game in his five seasons with the Warriors, Shaun Livingston became a vital piece of the team’s rotation throughout the peak of its dynasty. The guard is a stabilizing force with elite length that doesn’t squander possessions.

Livingston may not be able to anchor a second unit but he’s a low-risk depth piece that would make any team better.

Despite the fact that we’ve all been conditioned to shun Ryan Anderson because of the albatross price tag that haunted him, when utilized consistency, he’s a competent stretch four capable of flirting with the .400 mark from beyond the arc.

Anderson on a near $20M contract is unpalatable, yes, but Anderson on a minimum deal is something that any team looking to add floor spacers should consider. There’s no guarantee that a 31-year-old Anderson could make waves on a competitive basketball team but I’d be surprised if a team doesn’t take a chance on him before the end of the season.

Iman Shumpert is another example of a player who has become somewhat radioactive for financial reasons but his eight-digit annual cap hit is a thing of the past. Don’t bet your house on the 29-year-old matching the .366 he shot from beyond the arc in Sacramento last season but he seemed to be a positive influence on the Kings during his stay there.

Unlike most of the players on this list who seem hand picked to fill gaps on a contending team, Shumpert could be a valuable addition for a team still trying to establish itself. The energy he brought to the Kings locker room last season is no joke.

There’s no denying that Marquese Chriss has had plenty of opportunities to carve out consistent playing time across stints with the rebuilding Phoenix Suns and Cleveland Cavaliers. The fact that he hasn’t, should not go unnoticed.

That being said, I’m not ready to give up on the the 22-year-old former lottery pick just yet. Chriss averaged 16.5 points and 6.8 rebounds when given more than 20 minutes of playing time during his rookie season three years ago.

Yes, that’s a cherry picked stat, but it’s not Chriss’ fault that he landed in a terrible developmental environment when he was drafted. If Chriss was going to be a competent starter, he would have forced a team’s hand by now, but there’s no reason why he can’t still be a valuable, athletic, rotation big with upside.

Amir Johnson has never been a high maintenance NBA player and as a result has put together a long career as a valued rotation player for a number of competitive basketball teams. Sure he may not be the endless source of bounce and athleticism that he used to be but the prep-to-pros veteran is still just 32 years old.

Don’t expect Johnson to be a game-changer if he ends up back on an NBA squad but do realize that he’s an adaptable high character guy that could provide front court depth cheap.

Justin Anderson has bounced around a number of franchises since arriving on the NBA radar in 2015 and shown flashes of potential as a solid defensive wing with good size. If he ever lands with a team that can coax more out of his jumpshot, he could have a long career as bench piece on the perimeter.

That sort of late-blooming project may not appeal to rebuilding teams but where’s the downside for a playoff club with their rotation set and a roster spot available this late in the offseason?

If you don’t day dream about Jamal Crawford landing on a playoff team, filling his role as token elder statesman on farewell tour admirably throughout the regular season before ultimately rising to the occasion as an injury replacement when his down-and-out championship hopeful squad needs him, immediately dropping 30-plus off the bench and punctuating a crucial postseason victory with a loping crossover that frees him up for a game winning jumper then who even are you?