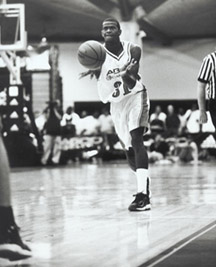 When the Minnesota Timberwolves chose Kevin Garnett with the 5th pick in the first round of the 1995 NBA draft, the league exploded with youthful draft entrants whose games hadn’t hit puberty yet. It’s fair to say that Garnett, LeBron James, and Kobe Bryant represent the best possible outcome for guys who made “The Jump,” while other players who were blinded by their own hype and swallowed too much bad advice.

Beginning with the 2006 draft, the NBA made it impossible for players to enter the draft straight from high school. The league placed an average age mandate of 19-years on top of a rule that required players to be one year removed from their high school graduation to be eligible for the draft. While the influx of high school players into the NBA has been halted, life goes on for those players who never lived their dreams.

1996
Taj McDavid: Coming out of Palmetto (SC) High School, Taj McDavid was not a major college prospect. There were no schools trying to sign him. After his name went uncalled in the ’96 Draft, McDavid tried attempted to become eligible to play at Anderson College in South Carolina, but it’s unclear if he ever played there. In November of 2001, McDavid was “tested” by the now defunct Greenville Groove of the NBDL, but wasn’t retained. Today it is believed that McDavid still lives in his parents mobile home in South Carolina, doesn’t answer phone calls and still plays pick-up ball.

1998
Korleone Young: Suntino Korleone Young’s mother designed his name so that his initials would spell out “S.K.Y.” Santino Corleone is the name of James Kahn’s character in The Godfather. Like his namesake, Young took the NBA gamble and lost. His high school coaches at Hargrave Military Academy in Virginia where thrown off by the Kansas native’s decision to jump into the NBA. Young was taken in the 2nd round (40th pick) to the Detroit Pistons. He played three games in total for the Pistons and has roamed the CBA, IBL and overseas scenes ever since.

Ellis Richardson: Richardson’s decision to enter the NBA draft was as baffling as the league’s decision to switch to a basketball made from composite leather. Richardson was considered at decent player, but not a standout coming out of Poly High School in Sun Valley, CA. No major-college or pro teams were considering him at the time he entered the draft and many scouts had simply never heard of him. Even more laughable was that Richardson’s mother, DeMetria, was supporting her son’s quest and was acting as his agent. She was quoted as saying
“Just because you don’t win a state championship, people don’t think you’re any good,” said Mrs. Richardson. “Maybe if he played on a better team (Poly finished 11-15 Richardson’s senior year) with a better coach, more people would be supporting the decision.”
Richardson never made it to the NBA and by the looks of it, anywhere else. He no longer plays ball and was convicted of robbery sometime after the draft.

1999
Leon Smith: Not only was Leon Smith a project that was years away from steady production when the Spurs selected him in the first-round of the ’99 draft, but also suffered from serious mental illness. After blowing up at the Mavericks coaching staff during summer workouts, Smith was cut from the team and left to roam the unpaved hoops landscape as a troubled teen. With stops in the CBA, IBL, USBL and in Puerto Rico, Smith managed to play in 15 games with two teams (Hawks, Sonics) over two seasons. He signed to play in Jordan in 2005, left in April, and is not known to have played pro ball since.

2001
Ousmane Cisse: After slipping into the 2nd round of the draft, Cisse was finally picked by the Denver Nuggets. An undersized power forward, Cisse has had short stints with the Magic, Raptors, Warriors and Wizards but nothing truly noteworthy. The meat of his career has been spent overseas and in the USBL. He is reportedly spending 2007-2008 in Israel.

Tony Key: Because of academic woes that most of the players listed here suffered from, Tony Key said “the hell with it” and threw his name in the draft pool. Not considered a big-time recruit, Key resurfaced on the JUCO circuit and played a final year of eligibility at Mountain State, an NAIA school. As of late, he’s also played pro in he ABA and Mexico where he has put up respectable numbers.

2002
DeAngelo Collins: Since going untaken in the draft of 2002, DeAngelo Collins stock was at it’s peak when he was featured on MTV’s True Life series. He spent two stints in Juvenile Hall before he entered the draft and, one preseason stint and some summer league ball aside, has never really been close to making an NBA roster. He’s done foreign and domestic stints in the USBL, D-League, Turkey, Italy and Jordan.

Lenny Cooke: The hype around Lenny Cooke couldn’t have been bigger. He was once rated as high as #4 in the country. He had no natural position and up until about two years prior to the draft Cooke was still hoping in Wallabees (sues). He was a celebrity in and around New York City. You could find him courtside at Knick games with DJ Clue. While Cooke’s game was once touted as extraordinary, his post-draft blues is no different from a lot of players who weren’t drafted. Besides stops in China and the Philippines, Cooke has spent his entire career in the CBA and USBL, where he won the Rookie of the Year in 2003.

2003
Ndudi Ebi: Originally, Ebi was supposed to join the Arizona Wildcats and develop his game under Lute Olsen. The Timberwolves selected the London native with the 26th pick in the first round, but Ebi’s career was a work in progress. He played in 19 games over 2 seasons and hasn’t played in the NBA since ’04-’05. He is set to spend next season in Israel.

James Lang: A second round selection of the New Orleans Hornets in 2003, Lang road the USBL, ABA and Europe, signed several 10-day contracts and made a stop in Spain before he saw time in 11 games with the Washington Wizards in 2006-2007. In July of 2007, Lang participated in the Pepsi Summer League in Orlando with the Miami Heat.