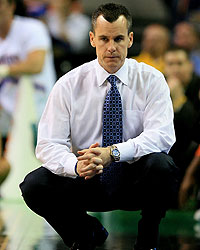 This is a post less for the sake of posting (although it doesn’t hurt–the point of a blog, after all, is that it is updated frequently, no?) and more of a post for the sake of my sanity. Because the Billy Donovan story is like a neverending quest to find one 42-year-old man’s path to righteousness and glory.

I believe Disney made this movie once and it was called Labyrinth. And it was good.

But, alas, there is no David Bowie, nor tight-fitting purple spandex. Merely millions of NBA and college basketball fans startlingly perplexed. We are turned around and now I have no option but to weave this thing out. Because I’m not sure even he has.

Seven years to coach the defending National Champions of college basketball. Seems pretty clear-cut, right? Ah, but the savvy remember this: no Horford, no Noah, no Brewer, no Green not even a Humphrey. (Is there any reason this is starting to sound like A Christmas Carol?)

Still, he would likely be assured the job security of any Supreme Court Justice not named Thomas. When there are five defectors there is a grace period and he would continually be reminded of this in his recurring nightmares.

Oh, and the loyalty aspect. Never have teal and orange had so much pull. He’s not going to the University of Kentucky, he said. Not for 7 years and $28 million. He’d rather take a little bit less to stay in Gainesville.

“My intentions are to be at the University of Florida and coach their basketball team and I’m happy there and I like the school and I love the players and coaching and the athletic department has been very, very supportive,” he said.

Ah, the musty, pungent allure of temptation. Magic GM Otis Smith must have done, hell, six or seven spritzes. He was going to make sure Billy Donovan was to be an Orlando Magic and, by day’s end on May 31st, Billy Donovan gave into the grabby, gloved, oversized hands of the town that a mouse built.

Fitting, really, because Billy Donovan was now a similar rodent. A weasel.

Sweet nothings to a coach departed were whispered all throughout the Internet. “For Pete’s sake, Billy… thanks for the memories,” one wrote.

Oh, and there was also the slightly less sweet. “He’s dead to me,” wrote a Gator fan. Another posted a waving emoticon that eventually gives the finger. Which was probably about right.

He did take the money. All $27.5 million bills spread out into five years’ worth of installments. He was introduced on June 1st, fashionably attired and possibly fashionably late.

“Maybe he’s still in Gainesville!” quipped one member of GatorSports.Com.

Adorable. Maybe he was still in Gainesville… Oh, kids…

Then he showed up. “So much for that,” pointed a pessimist.

“Maybe it was a hologram,” said GatorSeaninDC, that blind believer from before.

Even cuter! Maybe it was a hologram! Somebody get this kid on Kids Say The Darndest Things!

Wait, maybe it was a hologram.

“We look forward to Billy leading us to the next level,” said Otis Smith, informing the public that Billy Donovan would be the next coach of the Orlando Magic.

So Billy Donovan backed out. And as of 5:03 EST on Monday evening, he currently sits jobless.

I’d love to point this to my doing or really anybody else’s scathing letters lambasting him for fraternal infidelity. But it was a point of pride, the Magic says.

“Billy is conflicted with those emotions and the opportunity he has ahead in Orlando and in the NBA,” the Magic says in a press conference today.

Until we find out a final verdict, and I don’t say this with tendencies towards college or otherwise, isn’t it nice to see someone in professional sports with any hubris? Anyone? Sure, it took him a day on the new job to figure it out, but there has to be something to be said for making the right decision. Even if he does get one tag he’ll never let down.