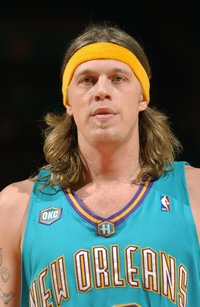 In what is shaping up to be one of the greatest seasons in League history, the following – though relatively meaningless in the grand scheme of things – is still quite exciting: David Stern will re-instate Chris “The Birdman” Andersen today.

Andersen, 29, will be re-signed by the Hornets today or Wednesday if he passes a mandatory physical examination.

Andersen is famous (or infamous, depending on your point of view) for his surreal performance at the Dunk Contest a few years back (that is one of my top five favorite moments ever), and for the distinct possibility that he may have played much of his career with cocaine coursing through his veins. It’s not hard to tell why he’s beloved by the unwashed masses.