The Blogs After Yesterday 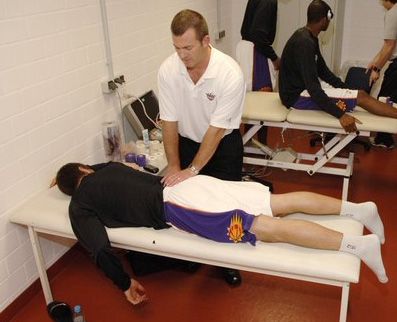 During last NBA season and all through the playoffs, I wrote a daily column recapping the league action from the previous night. It was called The Day After Yesterday. Last night I was unable to watch any of the games, but here are some blog write-ups of each game. My goal is to present blogs from both sides of each game, and I expect the amount of blogger coverage to really step up once the games start to count. If you have opinions on your team’s game after they play, email me and we’ll cover this thing together. I’m in deep concentration thinking of the best way to cover the nightly action this season. That’s what training camp is for. Winning and losing doesn’t matter at this time of year. Just individual performances (if even that). This is the first step into something much more refined.

Believeing in Magic on the Orlando-Charlotte game with Adam Morrison going off for 19 inlcuding 10 points before people were in their seats. Grant Hill scored 16 in 18 minutes. He lives!

Danny Can’t so… Can Danny on the Celtics-Cavs game. Yaysports NBA is back on the LeBron beat. Bassy had 1 assists and 5 turnovers. It looks like Gerald Green and Rondo played well. LeBron took it easy.

Hornets Central on the Mavs-Hornets game. No Dirk, no Peja. Tyson Chandler had 6 boards and 2 blocks in of course, limited minutes. The Hornets only attempted 5 threes.

Nobody seemed to want to write about Grizzlies-Rockets. The final score was 75-69 and Yao and Pau both sat out with injuries, so I can’t blame you. Battier had a very Battieresque night with 8 points, 7 boards, 2 steals, and no turnovers. Rudy Gay led his team in FG attempts with 18. He scored 14 points.

Pistons-Heat, really not so exciting at this time of year. Detroit Bad Boys has a wrap-up and the champs were dominated by Nazr Mohammed according to need4sheed.

And the LATimes blog on the Lakers-Jazz game. Kobe didn’t play and L Odom had a nice game. Carlos Boozer with 18 and 12.