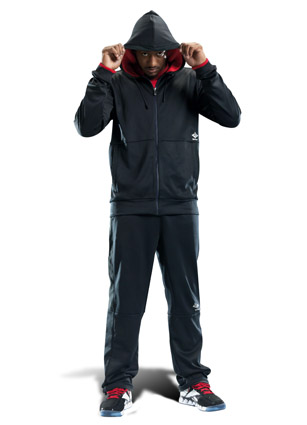 It’s a crisp late summer day at Reebok HQ in suburban Boston, and John Wall can’t hold back a toothy grin. Today, work at headquarters has been put on hold to host a handful of high school standouts hand-picked by Wall for the company’s first annual Basketball Summit.

But the Wizards’ guard knows—as well as everyone else in attendance—that this is his house. Here and now, he’s the man. The face of the franchise—a role he’s grown accustomed to, along with the intense spotlight that’s followed him from Kentucky to the nation’s capital.

Some players might crack under the pressure. Instead, the only thing Wall cracks is a Hollywood smile, wider even than those on the faces of Reebok’s baby-faced guests. He soaks up the attention, and as he shows out for the assembled crowd of employees, his infectious personality takes over the building. For a moment, as he shares a laugh with one of the high schoolers, he seems more like a teenage kid enjoying a day off than an emerging NBA superstar.

How easy it is to forget that Wall—who averaged 16.4 ppg and 8.3 apg as a rookie in ’10-11—was himself a high school senior in ’09. To forget that despite finishing his rookie season with more assists per game than Jason Kidd, Russell Westbrook and Derrick Rose, he couldn’t legally buy himself an adult beverage until this past September.

Yet Wall refuses to use his youth as a crutch. He wants to be compared to the best, and he wants to win. Now.

“I’ve got to get to the Playoffs,” says Wall. “It’s not fun sitting home, watching them other guys play. I like to play.”

Based on his summer, it’s more than “like to play.” It’s love.

Since the conclusion of this past NBA season, Wall’s been a man on a mission to conquer the off-season hoop circuit. DC, Baltimore, Indy, Las Vegas, Seattle. Wall’s been wherever there’s quality basketball to be played and has done his best to dominate anyone who lines up across from him.

After dropping a cool 41 in his Goodman League debut, he averaged more than 40 in a week’s worth of games at the Impact League in Vegas, then posted a 41-12-11 triple double in an Indianapolis exhibition. Of course, summer league stats are loose, and while gaudy numbers from pick-up games tailored to the 6-4 Wall’s athletic, fly up-and-down style may not be a true indicator of growth, he’s also shown a much-improved jumpshot, with a special affinity for the  elbow J off a high pick-and-roll rub—not exactly a staple of the playground game.

Sure, Wall could show up to the occasional charity event, flash his trademark smile, jog up and down the court for 40 minutes, pocket some change and go about his summer vacation. But that would be unsatisfying—and unlike him. Wall’s will to win won’t allow him to do anything but treat every pick-up run like a mid-season matchup.

“That’s the competitiveness in me, man,” Wall explains. “I always had that killer instinct, that dog in me, since I first picked up a basketball. When I’m playing, when I put a basketball in my hands, I take it all serious.”

It’s true. Even a casual game of two-on-two at Reebok headquarters is anything but for Wall. He barks out the score after sinking a long three over Darrick Wood, a St. John’s-bound rising senior. “Get this child off me!”

Perhaps it’s hard for Wall to hit the OFF switch, considering the non-stop grind that got him to where he is. If nothing else, his mercurial rise from relative obscurity prior to his junior year of high school to No. 1 pick in the ’10 Draft has taught him to never stop improving—and proving—himself.

“I feel like I still have a whole lot to prove,” he admits. “I think last year, you saw a little bit, but not the full me. And there’s still a lot for me to learn about this game, and to develop and get better, to show my total package.”

Hard as it is to imagine, there was a time not long ago when the name John Wall meant nothing in the basketball world; a time before his high school mixtape had more than 5 million hits on YouTube; a time when NC State was the only DI program actively recruiting him.

An 18-hour drive from his hometown of Raleigh, NC, to Chicago for the ’07 Reebok Breakout Challenge and a top-five performance later, he got his shot by earning an invite to Reebok U, then the name of the brand’s high school camp.

“I went there and played against guys like Brandon Jennings, Isaiah Thomas, all the guys I was looking up at on Scout.com,” says Wall. “I just played well that whole weekend, and ever since then I started getting known as ‘John Wall,’ not just that little skinny guy from North Carolina.”

The momentum that followed (copious HS All-American nods) resulted in a commitment to Kentucky and Coach John Calipari, a man with a reputation for churning out NBA point guards. Suddenly, Wall went from hunter to hunted, the frontman for one of the best recruiting classes in college basketball history.

But Wall didn’t skip a beat. He averaged 16.6 ppg and 6.6 apg in his freshman year while picking up SEC Player of the Year and National Freshman of the Year honors. All while taking the competition’s best shot every night.

“I had the biggest target on my back,” he says of his time in Lexington. “It was crazy.”