The Bulls Are Perfectly Happy With Their Team, Thank You 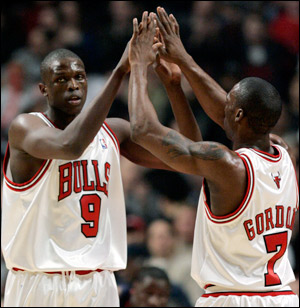 Coming into the 2008 season, the Chicago Bulls are one of the more intriguing storylines to follow. Despite humiliating the Miami Heat (who were defending a title, no less) in last year’s Playoffs, no one (other than Russ, of course) is expecting very much from this team going into the new season.

Unlike the Celtics, they didn’t make any waves in the free agent market; Chicago wasn’t in the press like the Knicks; and they seem to have cooled on the idea of trading for the League’s biggest problem. Yup, they’re content with what they’ve got and they’re ready to go to war with them. From the Sporting News:

“You could make the case that we didn’t throw some crazy deal together,” [General Manager] John Paxson says. “But our young players are going to get better. That’s the path we’ve chosen, and I am happy with it.”

And why wouldn’t he be happy? Led by an impressive (if not young) cast of talented, tough, and battle-tested players, the Bulls have what it takes to compete with just about anyone in the East.

It just might turn out that – at least, this is what Bulls fans are hoping – the best move is no move at all.