The Bulls Punish Their Own 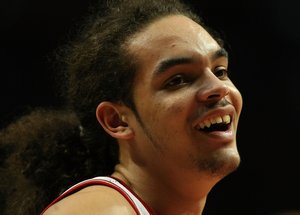 Joakim Noah didn’t play yesterday as the Bulls got thumped in Atlanta. Noah wasn’t injured or suspended for the game. Instead, his own teammates elected to have him sit the game out.

Noah apparently blew up during a team practice on Friday after longtime assistant Ron Adams criticized him, and Bulls players felt it was simply unacceptable that a rookie behave in s such a way. So, they voted that he not suit up against the Hawks (the team had also held him out of the previous game against Philly.)

Noah, as you can imagine, was less than amused.

”Ask the players who made the decision,” he said. ”They just told me what I did was unacceptable. I don’t know. Do I agree with it? It doesn’t matter, it doesn’t make a difference. I respect my teammates. I respect their opinions and stuff like that. I just have to deal with it. I just have to accept it. What do you want me to say? I’m a rookie. It is what it is, I just have to move on. There’s nothing I can do about it.”

NBA players usually stick together in these matters, so I was a little surprised by this. Despite the move feeling a little too high school for my taste, it’s still pretty cool. Though I strongly doubt Noah feels the same way.