The Celtics Are Thinking Repeat 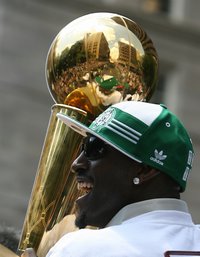 It’s the question they’re going to be forced to address all season long: Can you guys repeat as champs? So far, the Boston Celtics aren’t shying away from answering it in the affirmative.

“We have our nucleus back, so we are looking to repeat,” Rondo said. “But we are going to take it one step at a time, like last year.”

“I looked up and saw the banner from last season but I also saw we haven’t repeated since ’68-69,” Pierce said. “That’s more motivation to repeat. So, let’s try to make more history.”

It won’t be easy, of course, for the C’s to hoist an 18th banner for the franchise. The Eastern Conference has only gotten more competitive, and they’re counting on the (currently suspended) Darius Miles and his surgically repaired knee to replace James Posey.

With the possible exception of Paul Pierce, look for the repeat talk to die down as the start of the season wears on.