The Champs are here… 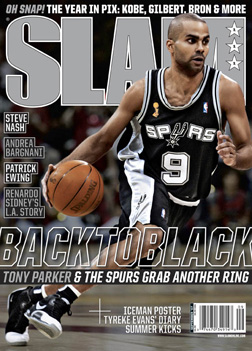 This isn’t the only cover to come on sale this week with Tony Parker on the cover. Of course, even though we did poke some fun at Tony and Eva’s big event, our legitimate coverage has nothing to do with weddings (though if celeb-mag buyers want to pick us up, we welcome the newsstand sales). Nope, your boy TP got the cherished “champs cover” by earning it on the court with his MVP performance against the Cavs. Things move so fast in basketball now (Marcel Mutoni has posted like 18 newsworthy NBA columns since I started a rough-draft of this one when we got early copies of the issue in) that the Spurs title seems like old news. But that’s kind of absurd. I hope for the sake of everyone in the San Antonio organization that they are still enjoying the fruits of their year-long labor, considering they haven’t even been world champs for a month.

I also hope fans still want to read about Tony and the Spurs. Traditionally, this issue does well, probably for just that reason: an NBA fan has every reason to read, remember and save an issue covering their favorite league’s championship team.

That said, we would never risk alienating those who are suffering from Spurs fatigue by making the issue all about them.

That’s why there is a lot of other good stuff in this issue, from bedroom wall-ready pictures of the year to timely features on Andrea Bargnani and Steve Nash to sitdown q+a’s with one of the all-time best big men (Patrick Ewing, written by the recipient of hundreds of PE’s patented fist bumps, Russ Bengtson) and a guy who may have a Ewing-like impact on the League someday (high school class of ’09 phenom Renardo Sidney, written by expert high school writer Ryan Jones). As I’ve teasingly mentioned on the site in the last few days, there is also a sick feature on the dysfunctional 1994 Golden State Warriors and our new diarist is introduced. Yes, it’s Tyreke Evans. And yes, he has a very compelling story that we look forward to tracing throughout his senior season.

I’m sure some of our other writers will chime in about the issue, but that’s the nuts and bolts of it. Subscribers should be getting it in the next 10 days or so, while newsstands should have it this weekend. Cop it.

Having said all that about the issue, I wanted to at least briefly touch on the new era of the website and explain my relative absence from posting on the site (not that a lot of you probably noticed; I realize some of our longer-tenured online columnists trump me in popularity, which is cool). Right after I got the job as editor-in-chief, I posted a very hopeful column about my plans. The magazine stuff rings true: we have a new look, we’ve diversified the stories we cover and the voices who deliver them, and it is absolutely my focus.

The web stuff hasn’t proven to be as accurate. I planned to post every Tuesday with my own column, and I promised to stay out of running the website. Neither has really happened. When I had/have something to say and we’re not shipping an issue, writing columns on here has been great. But when we’re in shipping mode, and every hour in the office feels like there’s seven seconds left on the :24 second shot clock, creating an original column is not too easy. Part of me is tempted to say I simply don’t have the ability to write a good weekly column, but I’m not gonna’ be that hard on myself when doing so is combined with the job of running the magazine. What’s more, while Lang, Sam and Johnathan Anderson mostly handle things on the site (with recent and needed help from interns Ben Collins and Jon Weiner), I have been chipping in on the running of the site as well, from editing and posting other people’s columns to sitting in meetings about the site’s design and functionality (both of which are still in development mode; please be patient). Point is, the once-a-week thing is simply not possible to keep up.

Whether he found my weekly columns boring or truly believes the actual magazine needs an outlet on the site, online guru Sam has made it clear that in his opinion, my role on the site should be to explain the magazine and answer questions about it that our online readers might have. Seems like a fair idea. So, here’s the new approach: got a question about our current issue? A past issue? One of our writers? A kid we featured in Punks three years ago? Email me at [email protected]. Any question that I can answer I will hold onto and, when I have time, I will answer them in “Ask the Ed.” columns. In the meantime, I’ll stay grinding on the mag and the site—mostly behind the scenes—while reserving the right to post an original column when I’ve got the right idea and the right time. I just won’t make any more promises I can’t keep.