The Chinese Want Yi Jianlian to Sign With Bucks 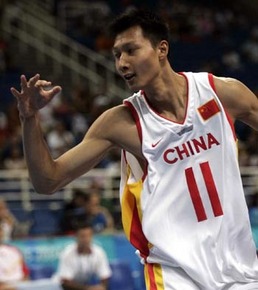 -The (Chinese) people have spoken: A online poll recently revealed that 68% of the 9,000 people that were polled want Yi Jianlian to sign with the Bucks.

“Fegan will hamper Yi’s future,” former national team coach Qian Chenghai was quoted as saying in yesterday’s state-run China Daily newspaper. “I don’t think Yi refused to join the Bucks; it is Fegan who doesn’t want him to join.

“We don’t want to see Yi destroy his reputation in the NBA and return to the Chinese Basketball Association. That’s horrible.”

(Listen to your peoples, Yi.)

-The Wizards and DeShawn Stevenson aren’t seeing eye to eye on a new deal. According to the WaPo, the team is offering $15 million over four years, but DeShawn wants something in the $18 million range.

(Hopefully, DeShawn and his agent won’t be dumb enough to make the same mistake twice.)

I have a feeling that James White won’t make it big as a Spur. He has been marinating in their culture for several months now, and he’s still calling for the ball all the time. playing only OK defense, and shaking his head every time a teammate fails to send him an alley-oop lob. I’m no expert on Spurs culture, but from what I have seen in the regular season, that is not it.

(All together now: Free Flight!)

-Darius Miles is a good dude. He is paying for the funeral and memorial services of a 5-year old boy who was killed in freak camping accident (Via: Blazer’s Edge):

“We were all so shocked by this,” a family friend, Margi Seitz, tells the Tigard Times. “He was touched by this story … only the Lord knows why (Miles) has chosen to do this, but it is very much needed and greatly appreciated. There really are no words.”