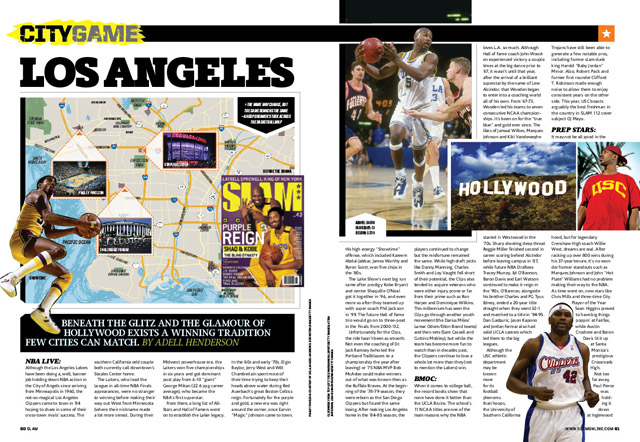 Whenever the words Los Angeles and basketball are combined, the thought of the Lakers (or anger in some cases) usually enters the mind. However, there’s more to the Los Angeles’ basketball scene besides the Lake Show. For instance, UCLA totally dominated under John Wooden’s leadership. USC basketball has produced its share of NBA pros. Oh, and suddenly Blake Griffin has people dashing to their televisions and computers to watch him and the Clips play.

In this feature, Adell Henderson showcased the b-ball history of this 498 square mile “City of Angels.” And since the 2011 NBA All-Star game will be in Staples Center, we thought a brief history recap of L.A. basketball would be cool. A hotbed for prep talent and a great place for a good open run, ladies and gentlemen: Los Angeles. –Ed.

NBA LIVE:
Although the Los Angeles Lakers have been doing a, well, banner job holding down NBA action in the City of Angels since arriving from Minneapolis in 1960, the not-so-magical Los Angeles Clippers came to town in ’84 hoping to share in some of their cross-town rivals’ success. The southern California odd couple both currently call downtown’s Staples Center home.

The Lakers, who lead the League in all-time NBA Finals appearances, were no stranger to winning before making their way out West from Minnesota (where their nickname made a lot more sense). During their Midwest powerhouse era, the Lakers won five championships in six years and got dominant post play from 6-10 “giant” George Mikan (22.6 ppg career average), who became the NBA’s first superstar.

From there, a long list of All-Stars and Hall of Famers went on to establish the Laker legacy. In the ’60s and early ’70s, Elgin Baylor, Jerry West and Wilt Chamberlain spent most of their time trying to keep their heads above water during Red Auerbach’s great Boston Celtics reign. Fortunately for the purple and gold, a new era was right around the corner, once Earvin “Magic” Johnson came to town. His high energy “Showtime” offense, which included Kareem Abdul-Jabbar, James Worthy and Byron Scott, won five chips in the ’80s.

The Lake Show’s next big run came after prodigy Kobe Bryant and center Shaquille O’Neal got it together in ’96, and even more so after they teamed up with super coach Phil Jackson in ’99. The future Hall of Fame trio would go on to three-peat in the Finals from 2000-’02.

Unfortunately for the Clips, the ride hasn’t been as smooth. Not even the coaching of Dr. Jack Ramsey (who led the Portland Trailblazers to a championship the year after leaving) or ’75 NBA MVP Bob McAdoo could make winners out of what was known then as the Buffalo Braves. At the beginning of the ’78-79 season, they were reborn as the San Diego Clippers but found the same losing. After making Los Angeles home in the ’84-85 season, the players continued to change but the misfortune remained the same. While high draft picks like Danny Manning, Charles Smith and Loy Vaught fell short of their potential, the Clips also tended to acquire veterans who were either injury prone or far from their prime such as Ron Harper and Dominique Wilkins. This millennium has seen the Clips go through another youth movement (the Darius Miles/Lamar Odom/Elton Brand teams) and then vets (Sam Cassell and Cuttino Mobley), but while the team has become more fun to watch than in decades past, the Clippers continue to lose a whole lot more than they (not to mention the Lakers) win.

BMOC:
When it comes to college ball, the record books show that none have done it better than the UCLA Bruins. The school’s 11 NCAA titles are one of the main reasons why the NBA loves L.A. so much. Although Hall of Fame coach John Wooden experienced victory a couple times at the big dance prior to ’67, it wasn’t until that year, after the arrival of a brilliant superstar by the name of Lew Alcindor, that Wooden began to enter into a coaching world all of his own. From ’67-73, Wooden led his teams to seven consecutive NCAA championships. It’s been on for the “true blue” and gold ever since. The likes of Jamaal Wilkes, Marques Johnson and Kiki Vandeweghe starred in Westwood in the ’70s. Sharp shooting deep threat Reggie Miller finished second in career scoring behind Alcindor before leaving campus in ’87, while future NBA Draftees Tracey Murray, Ed O’Bannon, Baron Davis and Earl Watson continued to make it reign in the ’90s. O’Bannon, alongside his brother Charles and PG Tyus Edney, ended a 20-year title drought when they went 32-1 and marched to a title in ’94-95. Dan Gadzuric, Jason Kapono and Jordan Farmar also had solid UCLA careers which led them to the big leagues.

Although the USC athletic department may be known more for its football phenoms than hoops, the University of Southern California Trojans have still been able to generate a few notable pros,
including former slam dunk king Harold “Baby Jordan” Minor. Also, Robert Pack and former first rounder Clifford T. Robinson made enough noise to allow them to enjoy consistent years on the other side. This year, USC boasts arguably the best freshman in the country in SLAM 112 cover subject OJ Mayo.

PREP STARS:
It may not be all good in the hood, but for legendary Crenshaw High coach Willie West, dreams are real. After racking up over 800 wins during his 37-year tenure, it’s no wonder former standouts such as Marques Johnson and John “Hot Plate” Williams had no problem making their way to the NBA. As time went on, new stars like Chris Mills and three-time City Player of the Year Sean Higgins proved to have big things poppin’ at Fairfax, while Austin Croshere and Baron Davis lit it up at Santa Monica’s prestigious Crossroads High.

Not too far away, Paul Pierce was holding it down at Inglewood and a scrawny young kid named Gilbert Arenas was over the hills in Van Nuys ballin’ out at Grant. Future Pistons standout Tayshaun Prince had a nice run with teammate Tyson Chandler at Dominguez, but he graduated before TC’s senior year, when he led the Compton-based high school to a state title. That, along with his nightly double-doubles, was enough for the athletic seven footer to skip college and become the second pick in the ’01 Draft. The beat goes on with Jrue Holiday of North Hollywood Campbell Hall, who is one of the top prospects in the country.

STREETBALL:
Aside from short-lived corporate functions such as Nike Battlegrounds and the AND 1 Mixtape Tours that have come through in recent years, the “real” streetball element has largely been missing in L.A. for well over a decade. There are all kinds of random pick-up games throughout the city, but they ain’t what they used to be, when legend Raymond Lewis terrorized courts throughout the ’70s. Lewis, who unofficially went down in history as the greatest player who never played pro ball, once dropped 56 points against former NBA Defensive Player of the Year Michael Cooper. The place where you’re most likely to see basketball’s best, raw and uncut, is the Drew League at Washington Park, where the motto is “No Excuse, Just Produce.”

RUNS:
Although competition isn’t  what it was in the ’80s, the runs down at Venice Beach in Santa Monica are good enough to quench your Saturday afternoon thirst. If you’ve really got skills—and access—UCLA in the summer has the best runs. Be sure to bring your A-game though, because the rec center is known for attracting NBA talent along with some of the Bruins’ top gunners. Throughout the year, plenty of the area’s finest thoroughbreds make their way out to California State University-Northridge (CSUN) to test their gangsta at one of their open gym sessions. No need to even lace ’em up if your heart starts pounding after walking in the gym. If that’s the case, Magic Johnson’s 24-Hour Fitness in Inglewood should be a cool enough run to get your mind right.

HOW WE DO:
Very similar to the ghosts of Lakers past, L.A. basketball is all about showtime. Expect the run-and-gun style of play all day, every day. Dribbling and shooting skills are a must to get consistent touches out here. And sorry big fella, post play is pretty rare around these parts. “It’s all about guard play out here,” explains former Texas Tech standout Jason Martin regarding his hometown. “You can’t find a (traditional) big guy in L.A. We don’t even know how to make them. All our big guys develop into wingmen.” Sounds about right for a town best known for a 6-9 point guard who convinced the world to believe in magic.