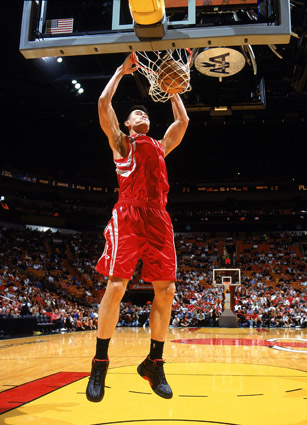 It’s not official just yet, but word is out that Yao Ming will be hanging up his No. 11 jersey this summer, and in celebration of the big man, we’re running all four of his SLAM features this week. Yesterday we brought you SLAM 69’s cover story, and below you can read the Yao feature from SLAM 88 (June ’05).

The interpreter stands close, ready if needed. There was a time when Colin Pine was Yao Ming, or at least his voice. Reporters would fire their questions at the big man and then wait, while the issue would be discussed in Chinese and then relayed by the, well, much smaller man to the waiting audience. Most of us could never be sure that Colin and Yao weren’t talking about the weather or what they had for lunch, but we would always receive a suitable answer, and that was good enough.

These days, Yao tries to do it alone. It’s admirable, really. Now in his third year in the States, he understands enough English to speak for himself. Of course, the answers are shorter now, more clipped, and it’s 50-50 whether he really understands the question. Then again, how is your Chinese? Thought so. He still defers at times to Pine, but Yao gets big points for working with us, for even trying. The quality of the interview suffers, but he’s doing it right. If he wants to be an NBA player, he has to learn the language, just like he has to learn not to back down from Shaq or try to chase Allen Iverson in the open court. He’ll never cut a rap CD or get a post-graduate degree in trash talk. But in four or five years, it’s a good bet that Yao might just be among the best interviews in the League.

Why? Because he just tries so damn hard at everything—and that includes his game. Yao is still miles away from becoming a night-in, night-out dominator, but no one can ever fault his effort. He works. He cares. It’s just that, right now, he is in something of a no-man’s land, both on the court and off. Just as he’s moving toward real dialogue in his interviews, so too is he getting closer to what everyone expects him to be in uniform. So, we get some gems on both ends, whether he’s talking about Tracy McGrady—“He’s a player who can make the game much easier”—or going for 30 and 9 against Seattle. And there are the clunkers, like when he smiles vainly and tries to force out a few syllables when he clearly doesn’t understand a question, or when he’s outrebounded by a guard, simply because he doesn’t yet have the pure instincts to be more than just a very tall area rebounder. He stands in the middle of everything right now, part good and part not-so-good. Part All-Star ballot superstar, part frustrated ballplayer. He’s so much more than the other giants who have played this game, better than Bol, Muresan, Bradley and Eaton all rolled into one. But he’s not there yet. And you need to understand that.

“It’s still too early to tell with Yao,” says Clippers coach Mike Dunleavy. “Big guys take four to five years to develop. We don’t know what adjustments he’ll make or how much more comfortable he can be.”

He’s still too slow at times. He doesn’t have that inherent sense of the game at its top level that will prevent him from seeming occasionally mechanical, even patterned: 1-2-3 shoot, 1-2-3 pass. And then he gets so mad at himself sometimes that you have to chuckle. Watching him bang himself in the head after a poor play or ball up his fists and shake them in fury when he throws a bad pass is great theater, because it’s so anti-NBA. You’re supposed to be cool, Yao. Admit your mistakes quietly. Touch a finger to the chest. Nod once or twice. Ah, innocence. You don’t find it too often in these parts, and it’s refreshing—to a point. For Yao to make it—really make it—in America, he has to get it all going, from the practiced clichés of the interview room to the cool approach on the hardwood, where mistakes are forgotten quick, if regarded at all. See, he has to get there, and he has to look like he belongs. Adjusting to the NBA is tough, and Yao is trying, really trying. Like we said, he just isn’t there yet.

“It’s hard to say how comfortable it is,” he says of his current existence, “but it’s much more comfortable than when I came here.”

Opening possession, Houston at Philadelphia: Yao chases Allen Iverson along the baseline, a truly comical moment, until Yao reverses field and stops Sixers center Sam Dalembert from scoring down the lane after taking a pass from AI. Nice play.

Two minutes later: Tracy McGrady makes a nice pass to Yao on the block, but when the big man tries to shoot, Sixers forward Kyle Korver strips him clean. Keep the ball up high, big man.

First quarter action: Yao tries to overpower Dalembert near the basket but can’t get his shot off. Where’s the strength?

Sixers’ ball: Dalembert wants to power jam on Yao. Instead, he sends it over the basket without touching a thing. You can’t teach height.

That’s how it goes with Yao. He’s good. He’s not so good. He makes big plays, and he lets some up. He succeeds. He fails. But when it’s all over, there is usually more good than bad. Yao finished with a modest 12 points and 5 boards in the 118-95 win, but he’s been good for about 18 and 8 throughout the season, right around his ’03-04 numbers. The improvement is subtle, but it’s there.

“What I’m impressed by is his work ethic,” McGrady says. “He’s doing a helluva job getting himself in shape and staying in shape and working on his game, trying to become a dominant force. He works constantly, every day, and I see that. I see that he wants to be great. He wants to do something special in this League. He wants to win.”

That message of encouragement and harmony wasn’t exactly out there at the beginning of the season. The Rockets staggered out of the blocks like a Ben Affleck movie, showing little teamwork and causing folks around the League to wonder about the intelligence of that McGrady deal. Houston started out 6-11, and neither of its All-Stars looked comfortable. Believe it or not, it was apparently a case of McGrady deferring to Yao, a condition no psychic could have forecast. But after a few deep conversations with Jeff Van Gundy and a hard-target search for his old, shoot-first self, T-Mac recovered and began to play more aggressively, realizing there was enough offense to go around. The results were almost immediate. By January, the Rockets were over .500, and by February they’d forced themselves into the Playoff picture.

“It took a while for me to go back to the T-Mac I used to be in Orlando, in terms of deferring to Yao, at times, and I think he was deferring to me,” McGrady says. “Now, I’m just playing basketball like I normally play and trying to make him a better player.”

To his credit, Yao offers no resentment about McGrady’s renewed offensive muscle-flexing. He understands the value of having a strong perimeter presence on the court, even if that strong presence can sometimes be overpowering and not always so willing to play inside-outside. Even Steve Francis, a huge Yao supporter, grew tired at times of Van Gundy’s old-fashioned low-post offense. McGrady (much like Francis, a great advocate of one-on-one basketball), can’t be expected to feed the giant every time down. And that’s OK with Yao. Reiterating how much easier Tracy’s presence makes things, Yao says, “A lot of times we play teams that pay attention to him. He can make a lot of passes that can give us open shots.”