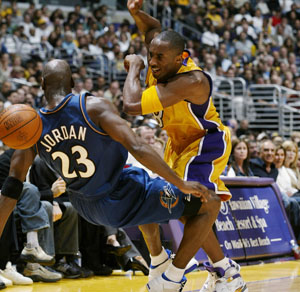 I want to start by alerting you to a slight change in my periodic Memo format. From heretofore I will generally use this as forum to ruminate and set forth tasks and deliverables. They will be directed or assigned to no one, in particular. I’m hoping that one of you go-getters will just randomly take the initiative to get things done. So, for instance, if I wonder aloud (in type): “Is there any way we can get ABC to fire Doris Burke without seeming sexist?” Well, I’m hoping one of you — preferably one of Doris’ fellow-females — will clandestinely seek to make that happen. Feel me? Other times I’ll plainly demand things like, “Get Belichick to hook me with a spy-cam inside Beyonce’s dressing room.” Or, more recently, “See to it that neither San Antonio nor Detroit make the Finals.”

This all seems simple and straightforward enough, right? OK, then…

Someone tell Kobe that I, for one, find it insane that folks think it’s insane that he be compared to Michael Jordan as a player. The indignant and incredulous response to whether Kobe is as “good” as MJ is crazy revisionist. Kobe is not as “great” as MJ, but he is as “good” as MJ. Perhaps no one will ever be as “great” as MJ with his six rings in eight years, his Nike mystique and the fact that he is the modern paradigm for basketball greatness. But being as “good” as Jordan deals solely with the way a dude plays the game of basketball. To that point, it’s pretty much humanly impossible to play the game any better than Kobe has played for the past three months. There is nothing MJ could individually do on the court that Kobe cannot.

I like to fashion myself a halfway rational dude. In my eyes/mind, MJ is not the player that everyone, including middle-aged experts paint him to be. If we let most everyone tell it, you’d think that MJ always willed his team to close victories. As if we’d go to basketball-reference.com and never see a playoff score with Bulls on the losing end of a close game. You’d think MJ never played with an All-Star, never wrongfully excoriated a teammate — you’d think he was perfect. He was not. He didn’t win every close game, there were times when he took bad shots and/or made mistakes in meaningful games, he always — in the 90s — had the help of capable teammates and coaches and there were times when he wasn’t a good teammate. MJ Deification has always grated on me. It becomes such a suffocating MO that a player that has three rings — and many underrated, transcendent performances during those title-runs — scores 81 points and, now, took a team full of youngsters and inexperienced vets to the Finals based on three rounds of startlingly profound play…still, folks scoff at the mere mention that Kobe is MJ’s equal on the court. I feel for Kobe, because when folks make the comparison, it creates a backlash — an unwarranted backlash seeing that he is the one player that can actually claim, with a straight face, equal-footing with MJ. Send him a bottle of Chateau Margaux and a note that says, “Forget MJ, Harold Miner couldn’t carry your jock strap.”

Give Snoop and Kurupt many thanks for “The Lakers Theme.” That baseline is too funky and I love the triumphant horns. I want that played during timeouts at Staples Center and it should also be the dominant music heard blasting from loud-speakers up-n-down Figueroa for the Lakers championship parade. And I want everyone to refer to Trevor as, “My nephew Trevor Arizu.”

Can we get people — broadcasters, journalists, fans — to stop referring to Tony Parker as “a point guard,” please?

The Doug Collins situation perplexes me. I must admit that I was appalled at his Ron Burgundy Moment during a Lakers-Jazz telecast when he went along with whatever idiot producer decided to run the Jazz Composite Defender graphic. You know, the one that was supposed to illustrate how Utah used multiple players to defend Kobe throughout the games. The diagram had Ronnie Brewer’s legs (surprisingly, they weren’t made to appear like a horse), AK’s arms…and get this, Harpring’s chest for his heart-strength-toughness, and, Kyle Korver’s brain. This made whiskey drip through my nose. What a stereotypical reach…as if Korver possessed anywhere near Kobe’s basketball IQ. But since Korver was an American born white-guy, I knew that was coming. I was surprised Doug didn’t look at that graphic during a TV timeout and say, “This graphic is lame, stereotypical and stupid. Maybe we should just use Korver’s mouth, since his defense is shouting ‘HELP’ when he gets iso’d on Kobe.” But, nope, Doug went along with it. Still, he remains, perhaps, the best X&O analyst in the game. So, why is he returning to the bench? I would have loved to see a young, energetic coach grow with this Bulls squad. Something tells me that Doug is gonna be burnt out before the 2010 All-Star break and Chicago will be back to square-one. As you know, I’d like for the Bulls to be a consistent Top Four team in the East, not one with a coaching-carousel that’s constantly rebuilding.

We’ve always lead the pro sports diversity charge. So why hasn’t a black coach filled any of the openings, yet? Don’t tell me it’s the lack of qualified applicants. Get this together.

Speaking of Chicago and Doug Collins, when I sent out the order to award the Bulls with No. 1 pick, I envisioned — as I said previously — a young, former-player-hire like Mark Jackson or Mario Elie. I thought, “All Chicago needs is an uptempo offense and a special point guard to go with all those finishers.” I wanted Derrick Rose in a Bulls uniform. And I liked the whole thought of Derrick Rose playing in his hometown even though it rarely works (see: the Knicks and Steph, the Clipps and Andre Miller, Patrick O’Bryant and next year’s Cedar Rapids squad in the ABA). But Doug brings added media scrutiny and pressure, the growth-allowance won’t be there. So I say keep Hinrich in Chicago and add Beasley. This means that we’ll have to settle for a Wade-Rose experiment. I truly believe that Rose is a once-in-a-generation PG, just so happens he and Chris Paul were born a few years apart. I don’t think a dude like Rose — who should always have the ball — meshes well with a cat like Wade — who should also do the creating. I fear that Wade’s presence in the backcourt will push Derrick off-the-ball too much and he’ll develop shoot-first tendencies. The risk is worth it, however, since a stint in Chicago, albeit under a great teacher, is destined to backfire at this point.

You know how Chuck screams “GET ME THEM SOCKS” at DWade in the T-Mobile commercial? Well, I want those yellow gators that Sager wore a few weeks ago. I’m going to a wedding in Mobile, Ala. and I think they’ll go well with my burnt-orange, 12-button, lapel-less suit.

I gotta shout-out Joe Dumars for the Stuckey pick. Thankfully, there was another young point-guard on the floor to provide some context. Watching Rondo and then Stuckey, it was clear that, although Rondo gets all the New England/Celtics-obsessed love; Stuckey is the actual great, young point guard. He’s the next Baron Davis. I love his game and the fact that Joe nabbed him at No. 15 from Eastern Washington makes me smile.

Speaking of Detroit, what is it with Motown and hip hop producers? First Dilla and now Black Milk and Ta’Raach! Ta’Raach’s board-work on the new C.R.A.C. Knuckles LP is like listening to a new genre. “Buy Me Lunch” might be the first time I’ve heard a Hip-Hop Funkadelic tune…not a hip-hop joint that sounds like a Funkadelic song, but a hop joint that approximates the feel and devices of the Funkadelic joints with ambling/non-sequitur choruses, the extended-jam motif, the nasty funk and abstract ideas/thoughts. “Go” sounds like music Miles Davis would make if he were young and alive today (he was always morphing); and that’s about the highest praise I can give any music. Why can’t Ta’Raach score next year’s ABC intro?

During the 2009 All-Star Weekend, I want an event where we see if Eddie House can get the ball across half-court against the Connecticut Sun’s full-court press.

The FCC has warned us about filming KG after he makes or blocks a shot. They’re going to fine us $1 per F-bomb. We’d split the fine with the Celtics. If my math is correct, we could stand to lose anywhere between one or two million fudgin’ dollars every game.