The Composite Ball Experiment Comes to a Merciful End 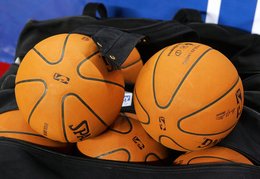 Remember when the NBA inexplicably introduced a wildly unpopular synthetic basketball a couple of years ago, an initiative so poorly thought out that it was killed merely two months after its birth? Sure you do. It was awful.

The ball took strange bounces off the rim, and players began complaining of cuts on their fingers when handling it. Well, there’s good news: The NBA is apparently shelving it for good.

After the League tried to pass off their new ball to the dregs of the D-League (and even those guys rejected it), they’ve decided to stick with the tried-and-tested leather ball.

The NBA will use leather basketballs in its developmental league next season, temporarily ending its attempts to reintroduce a composite ball at the NBA level, a league official has confirmed.

“We are committed to leather for the foreseeable future,” said league spokesman Tim Frank. “We just realized leather is what our guys wanted.”