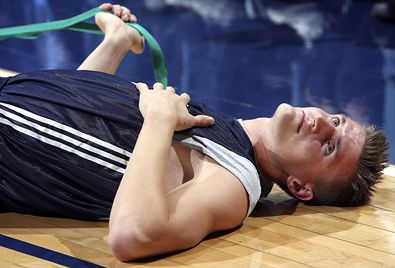 I tried to write something late last night about that Rockets/Jazz game, but my fingers wouldn’t let me. I stayed up, watched the whole thing. And it wasn’t much to write about. The one thought I kept having over and over is that Yao Ming is the Greg Oden of the NBA. Why don’t the Rockets run through Yao on every single possession? OK, I hear ya: Because of T-Mac! Well, sure, but going through Yao would only create more space for T-Mac, so that Mac doesn’t end up taking all those pull up jumpers from the top of the key.

My biggest question last night was what in the world has happened to Andrei Kirilenko? Three years ago I wrote a feature on him in SLAM, detailing his amazing ability to do everything and his seemingly limitless potential. He’s such an intriguing talent, and his personality is pretty unique as well. Here’s an excerpt from the feature I wrote…

One day last year, Andrei Kirilenko was sitting around his home in the foothills of Utah’s Wasatch Mountains when he got bored. So he fired up his silver Porsche with the AK47 plates, got on the highway and punched the pedal to the floor.

“I like to drive and drive fast.” he says. “What Russian doesn’t love to go fast?! One time in Salt Lake City I got up to 200 mph (about 322 km/h). It’s a good thing there were no police around. After that I realized that I have a wife and a baby. Now I don’t drive like that anymore.”

Kirilenko doesn’t mention that story as an aside, embarrassed that he’d done something reasonably dangerous and definitely illegal. No, he put that up on his website, www.kirilenko.ru, where he posts many other random observations, such as his love for computer games (“They are capable of absorbing me completely”), animals (“I adore dogs and horses”) and his eating habits (“I really like Sushi. Why? I just do. Also ice cream. Recently I’ve come to like dill.”).

How can you not like someone who has recently come to like an herb used mainly to flavor pickles?

When we were talking about how well he speaks English, Kirilenko told me, “First lesson in English? Fifth grade. Curses. Nobody interested in how to say, Hello, Hi. That not interesting. We want to say, F*ck you! Sh*t! And people learn wrong, so we saying, You f*ck! You f*ck!”

“I know a lot of people don’t call him a star yet,” Raja Bell, his teammate at the time, said, “but if he’s not right now, he’s about to be one of the brightest stars in the League.”

A knee injury slowed him, but ever since returning he’s just been kind of bobbing along out there, unassertive. He supposedly cried at practice the other day because he’s in such a funk, and last night he finished with more fouls (5) than field goal attempts (3), more turnovers (2) than points (0).

One of my favorite quotes of all time was when Jerry Sloan was asked to describe Kirilenko. “He’s like a rope out there,” said Sloan. “He’s got arms and legs going every which way, and he covers a lot of territory with his hands.” It’s sort of a weird mental picture, but I know what Sloan means — when Kirilenko was at his best, he seemed to be all over the floor at once.

So what the heck is the problem now? Anyone got answers?