The Curious Case of Vin Baker 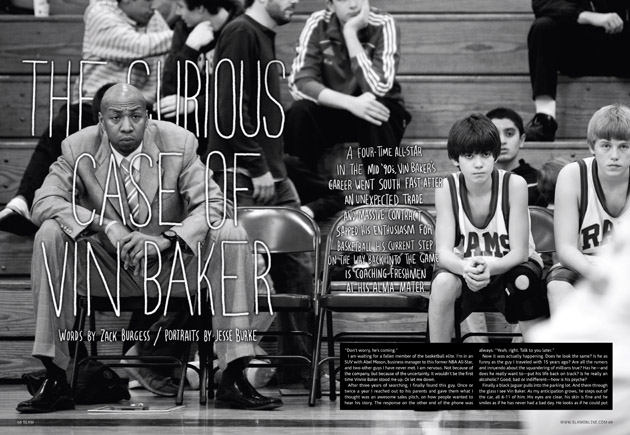 Yesterday, we ran a video of Vin Baker giving a halftime lecture to a group of high school freshmen, whom the former All-Star is currently coaching at Old Saybrook High School. Here’s the full feature that ran in SLAM 148, which is on newsstands right now. —Ed.

I am waiting for a fallen member of the basketball elite. I’m in an SUV with Abel Mason, business manager to this former NBA All-Star, and two other guys I have never met. I am nervous. Not because of the company, but because of the uncertainty. It wouldn’t be the first time Vinnie Baker stood me up. Or let me down.

After three years of searching, I finally found this guy. Once or twice a year I reached out to his parents and gave them what I thought was an awesome sales pitch, on how people wanted to hear his story. The response on the other end of the phone was always: “Yeah, right. Talk to you later.”

Now it was actually happening. Does he look the same? Is he as funny as the guy I traveled with 15 years ago? Are all the rumors and innuendo about the squandering of millions true? Has he—and does he really want to—put his life back on track? Is he really an alcoholic? Good, bad or indifferent—how is his psyche?

Finally a black Jaguar pulls into the parking lot. And there through the glass I see Vin Baker. As my anticipation grows, he steps out of the car, all 6-11 of him. His eyes are clear, his skin is fine and he smiles as if he has never had a bad day. He looks as if he could put on a uniform today and go out and post what was once a usual line for him: 20 points and 10 rebounds. But the reality is this: He can’t.

On this late-winter afternoon, Baker is a long way from the NBA, the All-Star team, the Olympic team, the $86-million contract and the innocent young man who left the University of Hartford in ’93 as the eighth overall pick of the Milwaukee Bucks. He was here to talk about how he had put his life back on track with the same focus and vision that once made him a household name. Life had actually kicked Baker’s ass since he left the NBA, and he was here to answer the questions that everyone wanted to know: What happened?

“I think I experienced success way too fast,” Baker says. “I’m a tremendous competitor, which obviously got me to where I wanted to be as a basketball player. I wanted to get to the NBA, and I got there, but success came very fast for me. Once I experienced it, I think I kind of lost my lust for it. Not to say that I didn’t compete every night, but making the All-Star team four times in five years—after being cut from the basketball team in high school in the ninth grade—was overnight success. Within a span of eight years, I was an NBA All-Star. That’s a tremendous jump for anybody. It’s not exactly the Michael Jordan story, but it’s a story. I don’t know if I was necessarily ready to handle the success that God had given me at the time.”

By the time the Celtics acquired Baker from his second team, the Seattle SuperSonics, in July of ’02, he was already damaged goods. There had been roughly four years of binge drinking; he was out of control. Baker went from NBA All-Star to sparingly used backup center. In February of 2003, Baker was suspended after then-coach of the Boston Celtics Jim O’Brien smelled alcohol on his breath. It marked the beginning of the end of Baker’s career in the NBA. At the insistence of the Celtics, Baker sought treatment. He checked into Silver Hill Hospital in New Canaan, CT, for a 28-day rehabilitation program. From there it was on to 10 weeks of supervised outpatient therapy, with daily visits and testing at Silver Hill.

Someone should go to Springfield and chisel into the steps leading up to the Hall of Fame the names of the great players whose bodies failed them at the very moment they seemed assured of a spot inside. Penny Hardaway, Bernard King, Ralph Sampson, Grant Hill, Antonio McDyess, Tracy McGrady, Andrew Toney and Yao Ming are players who come to mind. Given that it is classified as a disease, should alcoholism be considered as devastating an injury as the ones that afflicted those players? Should Baker be accorded the same sympathy and concern?

When I run across people with incredible talents that only God could have given them, I can’t help but wonder how something so special could get so messed up. How does a multimillion-dollar athlete have his house foreclosed and owe over a million in back taxes? I don’t completely buy the drugs and alcohol excuse. Because there are those who drink and get high to their heart’s content, yet somehow they hold it together. Maybe it’s just bad decisions. Maybe, in the NBA, sometimes nice guys finish broke.

“I can’t say,” says Ray Allen. The Celtics sharpshooter played with Baker in Milwaukee and on the ’00 Olympic team that won Gold in Sydney. “I never really saw a change in him. He had pretty much been in a small town his whole life. And then going from the University of Hartford to Milwaukee, it was probably the best thing that could have happened to him, like it was for me coming into the NBA, because you didn’t have the trappings of NBA life that exist in other cities.”

When you talk to Baker and the people around him, it becomes painfully clear that his time with the SuperSonics was a turning point. You see, nobody likes to be traded. There’s a new coach, new system, new teammates and a new city to learn all over again. People, especially athletes, are creatures of habit. And Baker was no different.

“The worst thing to happen to him was going to Seattle,” agrees Allen. “As much as Seattle is a great city, I think the company he kept with him in Seattle wasn’t good for him. He was playing at such an All-Star caliber level. He went from being the best forward in the League at that time—even with Karl Malone in the NBA—to just being non-existent. You know, he was still a young man, and any nightlife activity that he was partaking in, the consumption of alcohol, you expect that to go along with the lifestyle. He was making great money, traveling to so many cities. That’s a part of [being an NBA star]…I think there was a point where he just let it consume him.”