The D.A.Y. from a secret location 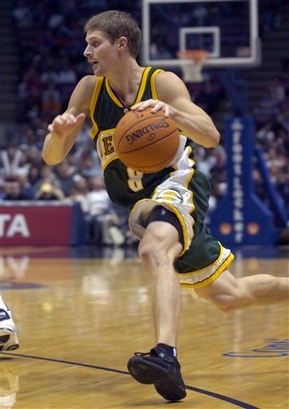 SEATTLE 119 NEW JERSEY 113
Luke Ridnour picked and popped his way to a career high 32 with 7 assists, putting the Nets ina 25 point hole they couldn’t overcome. Vince tried his best, scoring 38 while going 5 of 9 from three, and Jason Kidd had 20 and 12, but it was too much Ridnour. I guess those new point guard friendly rules are working. Rashad Lewis, Chris Wilcox, and Ray Allen each scored in the 20s.

ORLANDO 92 BOSTON 89
The Magic blew an 8 point fourth quarter lead, then they came back and won. Because the Celtics are bad. Very bad. Paul Pierce scored 15 of his 21 in the fourth, but Boston just couldn’t get that big stop when they needed it. They’re 1-6 by the way, and that one win took a buzzer beater in a OT against Charlotte. Dwight Howard had 17, 15, and 3 blocks and Jameer Nelson led the Magic with 24 and 7.

CLEVELAND 102 NEW YORK 96
There were some people from SLAM at the game. I figure at least one of them will have game notes. Damon Jones soaked up the NY spotlight hitting 7 of 10 threes on his way to 29 points. The Knicks once again showed that they can make inspirational runs when the game is out of reach and make a game seem like less bad of a loss than it really was. Channing Frye broke out of his funk with 17 and 9 and 2 technicals. Nate Robinson led the Knicks with 19 on 9 of 10 shooting. LeBron made the plays down the stretch, 29, 6, and 4, and so on and so on.
Alright everyone, thanks for reading the shortest D.A.Y. yet.

(If you’re curious, I have not been kidnapped and all is well. I am fine. I do not need any of you to come looking for me or to avenge my death.)