The D.A.Y. games were played after the A.I. trade 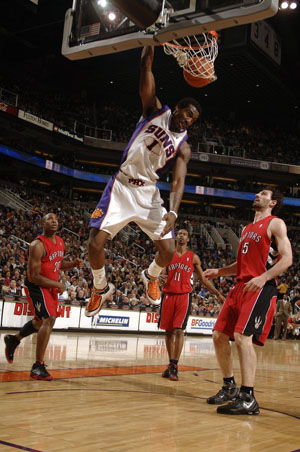 For some reason the program we use to create the site wasn’t working at my house. Thankfully there were only 2 games last night, and nobody cared cause ALLEN IVERSON was just traded!!!

PHOENIX 115 TORONTO 98
The Phoenix Suns have now won 15 in a row. Toronto was an innocent bystander that got run over, as they should have been. 19 and 9 for TJ Ford and 18 and 8 for Bargnani off the bench. The Suns are balanced and unstoppable right now. If I had written a Dirty 30 over the past 2 weeks, they would have been #1. I didn’t get around to it last week because Cub gave us his Western Conference wrap column, and the East isn’t worth mentioning most of the time. By the way, Allen Iverson now joins the West, and the East got back Andre Miller. This is why the divide between West and East keeps getting wider. Amare had 28 and 10 on 11 of 14 shooting, Nash had 15 assists, the Suns hit the magic numbers of 50% from the field, 40% from three, and 80% from the line. Tough to stop them when they do that. Or when they play basketball in general.

CHICAGO 94 LA LAKERS 89
Starting center Kwame Brown had 18 and 12, and he was the best Laker on the floor. That will not happen very often. In the first game since Kobe’s bizarre criticism of Gilbert Arenas for being a remorseless gunner, he took a subdued 19 shots hitting only 6 of them. Luol Deng led the Bulls with 23 and 12 and Ben Gordon scored 22 off the bench including the free throws to seal the win.

GREG ODEN 1 HYPE 0
I watched a little bit of the Ohio State-Iowa State game. Greg Oden is a monster, and I mean that in a good way. Basketball-wise, he’s a dominant force. But it’s his aura that’s most impressive. He just has an intimidating way about himself. He’s a throwback to the days of the mean-spirited big man that wants to crush his opponent, and I get that just from the look on his face and his body language. He might be the nicest guy in the world. He’s just one of those guys that can intimidate with his presence alone.