The D.A.Y. Gilbert did it again 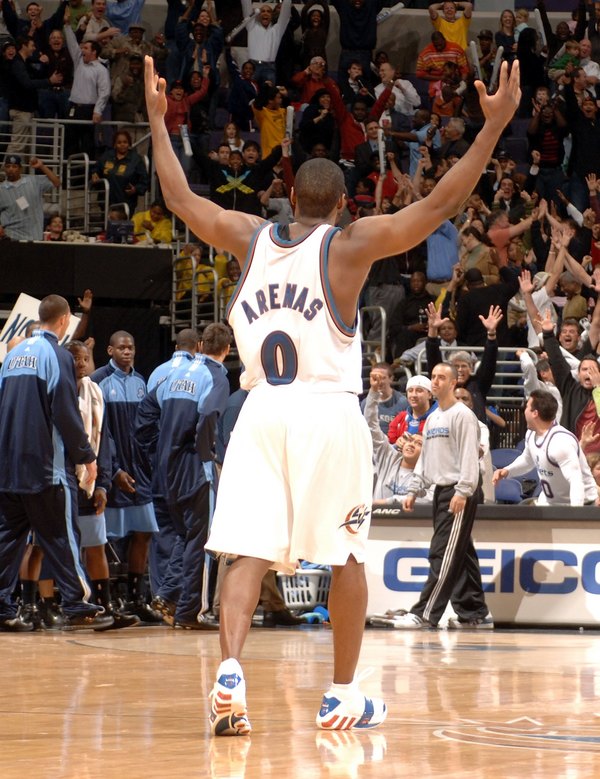 Seriously, another buzzer beater to win it? 51 points against Utah? There was a lot of greatness on display over the three-day weekend. Obviously Dr. Martin Luther King Jr. The Colts defense. Deuce McCallister. Sheldon Brown, one of the few Eagles I respect, for nearly decapitating Reggie Bush. The girl in the Superdome crowd wearing this shirt. John Brown a.k.a. The King of the Burbs on the White Rapper Show. Jack Bauer, who keeps putting himself on the line for a country that has hung him out to dry much like Drew Brees did to Reggie Bush, over and over again. Tom Brady and his deal with the devil, which allows him to throw interceptions on 4th down that should end his team’s season but end up as a 20 yard gain for his team. LaDanian Tomlinson, who watched Anchorman one too many times, and has made “You stay Classy San Diego” a way of life. But for all of that greatness over the three-day weekend, Gilbert tried to upstage them all.

WASHINGTON 114 UTAH 111
Memo Okur, 38 points and 9 boards. Boozer with 27 and 13. Deron Williams, 12 and 13. That’s all great work. Gilbert Arenas scored 51, heating up just enough at the end to win it, and he finsihed off with yet another game winner. The past few years it was more of a three-headed monster with the Wizards. Gil-Jamison-Hughes or Gil-Jamison-Butler. Gilbert Arenas is dominating this season. He was struggling before the 60 point game and so were the Wizards. Not any more. The game winning three when the game is tied has become his thing. The MVP chants are getting louder. Gilbert himself has admitted it will be tough to get past the Nash voters, but he’s on his way. If you thought Nash MVPs were shocking, think about this: Arenas was a second round pick. Unheard of in the NBA. Nash was the 15th pick, the Mailman was the 13th pick, other than that the lowest a guy has been picked and gone on to be MVP in the lottery era if we go back to Larry Bird is… Kevin Garnett with the fifth overall pick. Again, Gilbert was a second rounder.

LA LAKERS 124 MIAMI 118 OT
Really strange. Kobe seemed to be getting blackballed by the refs. Three free throw attempts for the game, and it seemed like he was attacking the basket whenever I had it on. After the Heat tied it late in regulation, Kobe ran the clock down, made his move, there was some contact and fumbling. No call. Not complaining, just saying it was strange. Dwyane Wade led his role playing friends with 35 and 8. Udonis Haslem and Jason Kapono combined on the play that sent the game to OT, off of a Wade miss and a scramble. Brian Cook had 25 and 10, and Kobe had 25 more. The Lakers are at times a pretty deep and balanced team, whereas Miami is totally dependent on one man’s superhuman play. Trading places.

PHOENIX 137 MEMPHIS 122
The Grizzlies and their Tony Baroney strategy is to not play any defense and run run run. Then the Suns came to town. I’m disappointed that Phoenix only scored 137. D’Antoni called off the dogs in the fourth and watched his team slow down enough to score only 27 points. The big news of the game is that Amare had 42 and 9 in 36 minutes. 15 of 21 shooting. Steve Nash had 15 assists, Shawn Marion had 22 and 12, and I just love how those are expected from them. Pau Gasol had 23, 9, and 7, Mike Miller had 25.

MINNESOTA 94 DETROIT 90 OT
Do NOT go to overtime with the Timberwolves. Mark Blount hit a lucky three to give them a 4 point lead, and they held on. The Pistons got 32 from Rip and a 1 of 11 game from Rasheed. Chris Webber watched from the luxury box with Joe Dumars, which is exactly what Chris Webber should be doing. Wait, he’s going to be playing for the Pistons? That’s crazy talk. Flip Saunders and CWebb together. Uh… we could be heading for a LeBron vs. Gilbert showdown for a trip to the Finals in the East. I don’t mean to completely diminish Flip here, but he chose to start Dale Davis at center in this game. KG had 19, 14, and 6 and Ricky Davis led the TWolves with 21.

CHICAGO 99 SAN ANTONIO 87
The Bulls played without Ben Wallace’s sore back and Chris Duhon’s non-Sunday practice attending self. Kirk Hinrich is suddenly healthy, locking down Tony Parker and throwing a 23, 10, and 7 up against the Spurs. Pop was not thrilled with Parker’s performance “It would have made more sense if he was hurt. But he’s fine, which is not the way he played, if you catch my drift.” 12 and 11 for Nocioni off the bench.

NEW YORK 102 SACRAMENTO 97
I went to this game with Ben (Osborne E-I-C). He’ll have more on it later today. All I can say is that I was there to talk with a certain member of the Knicks but the media swarm around him after the game was so thick, I barely got through. Very frustrating.

MILWAUKEE 99 CHARLOTTE 91
Bogut and Boykins. In their second game together, E.A.R.L. scored 32 and Andrew had a career high 27 with 11 boards. Matt Carroll hit 5 of 7 threes and scored 20 in the fist half, but missed two free throws in the game which is something you do not see from Matt Carroll. Final Fantasy and Chrono Trigger enthusiast Emeka Okafor had 17 and 12 with 4 blocks.

NEW JERSEY 105 INDIANA 95
I believe there will be an Appleson report from this one. Vince had 31, Kidd came close to another triple double, and the Mikki Moore rennaisance continues. Jermaine O’Neal had 14 and 10 in the loss. Much more on this game later today.

GOLDEN STATE 108 LA CLIPPERS 93
Last year a big part of the Clippers playoff run was how powerful they were inside. This year, they’re getting bullied by the son of their coach. L’il Dun, who Don Nelson called “A disaster” scored 18 and grabed 13 boards. Monta Ellis led the way for the Warriors with 24, and Baron dished out 13 assists. The Clippers had a balanced attack led by Brand’s 19, but were outscored 27-14 in the fourth. They’re just not a good team. Last year might have been a one shot deal.

TORONTO 104 PHILLY 86
Chris Bosh led the way with 27 and Joey Graham scored 18 on just 6 field goal attempts. The Raptors are a few percentage points ahead of the Nets for first place in the Atlantic. Philly, um, uh, used this game as an opportunity to evaluate many of their bench players.

ATLANTA 100 BOSTON 96
The Hawks won their second game in a row. Sadly that’s a big deal for them cause it doesn’t happen that often, and they nearly blew a 14 point lead to give this game up. Josh Childress had a 23 and 14 game in the win, while Al Jefferson was a beast with 18 and 17, Gerald Green scored 22 and Allan Ray added 22 more, hitting three threes. This was a match-up of two of the worst teams in the league and they were both playing short handed. Reported attendance: 15,234. That can not be true.