The D.A.Y. I was at a game and missed out 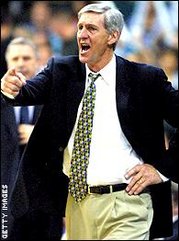 I was at the Portland-Philly game last night, and I really didn’t get to see much of anything else that happened around the NBA other than highlights. Naturally this was one of those magical nights where it seemed like every team played (only 18 did). Chris Paul got the best of LeBron and the Cavs, the Utah Jazz flexed some west coast dominance to get Sloan his 1,000th win, the Suns kept on rolling, Vince and Wade erupted, The Knicks had their 15th game where they fall behind by 30 with the starters getting booed and make a too little too late comeback, and more.

PORTLAND 81 PHILLY 79. You can check out my game notes for that.