The D.A.Y. Iverson lost to Philly 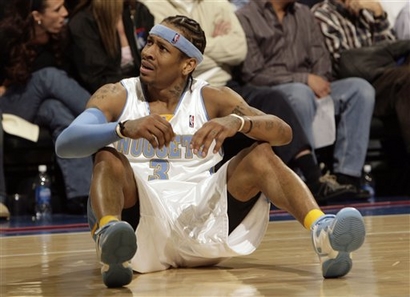 Well. If this was about revenge, the team got it against the player, even if there is a 0% sense of hostility between the two.

PHILLY 108 DENVER 97
Allen Iverson lost to his ex-team, picking up 2 techs and getting tossed for the exclamation point. After the game, his quote abotu Steve Javie was very interesting. “I thought I got fouled on that play, and I said I thought that he was calling the game personal, and he threw me out. His fuse is real short anyway, and I should have known that I couldn’t say anything anyway. It’s been something personal with me and him since I got in the league. This was just the perfect game for him to try and make me look bad.” Here were 10 reasons the Sixers were going to win the game. Three straight losses for Denver. Kyle Korver led Philly with 26 and Andre Miller and Iguodala had 10 assists each. A.I. had 30 and 9 and 7 turnovers in the loss.

CLEVELAND 82 SAN ANTONIO 78
Intriguing matchup, not so intriguing game. The Cleveland fans were going crazy in crunc time when LeBron found Damon Jones for the dagger three, and Larry Hughes was the difference in this game, hitting three threes in the fourth. I should mention that the 3rd quarter score was 11-10. Lots of defense. LeBron had 19 but didn’t dunk on The Robot. Tony Parker led the Spurs with 26.

PHOENIX 97 CHICAGO 96
Ben Gordon scored a career-high 41, buuuuuut… he made the wrong choice on a Steve Nash screen and gave Leandro Barbosa enough space to hit the game winning three pointer. The Suns weren’t at their best, faced this offensive assault from Gordon – who has 9 straight 20+ games now – and they still won on the road, coming from behind in the fourth. Amare won the battle of our NBA preview split cover with 24 and 18 to Big Ben’s 6 and 14.

DALLAS 112 SEATTLE 88
11 straight wins for the Mavs. The Phoenix-Dallas Western Conference Finals is going to be the real championship series. It needs to go seven games. Dirk had 31 and 15, Josh Howard had 21 and 9, and Seattle got a big first half from Ray Allen on his way to 27. The Mavs are ruthless machine. High grades at Mavs Moneyball.
ORLANDO 91 LA CLIPPERS 86
Jameer Nelson had a career-high 29… did anyone not have a career high? The Magic actually bullied the front line of Kaman, Brand, and Tim Thomas into a sorry second half with a combined 8 points and 6 rebounds. Damn. Dwight Howard had 14 and 14, while the Clips had just 28 rebounds as a team. The Clips third quarter was not so great.

GOLDEN STATE 97 NEW ORLEANS 89
The Warriors won despite J-Rich being J-Rich. Lang is all over it. Baron Davis and Matt Barnes had 29 each, while the Hornets really miss Chris Paul. And Peja. And David West. This game wasn’t nearly as good as when Baron and Chris went head to head early in the season. This was like a lesser sport.