The D.A.Y. Jason Kidd was NOT distracted 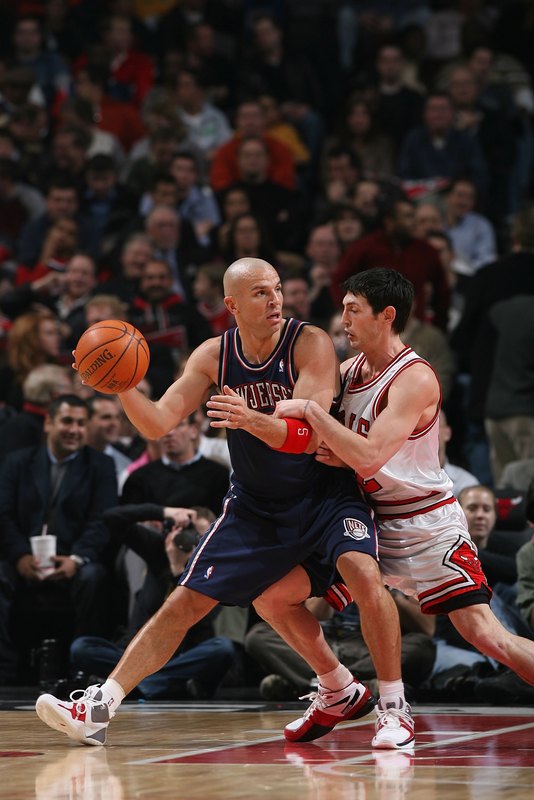 The Chicago Bulls need to stop taking 18 point leads on the Nets. They aren’t safe. Last Friday the Bulls jumped out to an 18-0 lead and the Nets came back and won. Now, to the present.

NEW JERSEY 86 CHICAGO 83
The Bulls had an 18 point lead, the Nets overcame. Jason Kidd’s off-court issues were beyond irrelevant as he carried the team with a 23-14-11 triple double. Ben Gordon hit all 5 of the threes he attempted in the first half on his way to 20 first half points, but Jason guarded him in the second half and held him to 3 points on 1 of 5 shooting. The Nets took over the game with a 14-0 run in the fourth that included a dunk from RJ, but once again it was JKidd with a huge three and the key defensive play stripping Hinrich when the Bulls were setting up for a chance to tie. Mikki Moore started and had a 13 and 12 game. Nocioni led the Bulls with 28. Yeah great, back to Kidd. I noticed that Joumanna’s lawyer seems to be threatening him with public exposure and bad press. This could be overstepping my bounds as an armchair psychologist, but I think Jason has been trying to play the public role of boring family guy for years now, ever since he hit his wife in the mouth. He realized that he’s rather be bland and PC and let his game do the talking instead of letting the world get to know who he really is, at leat as much as you can through interviews and publicity. Having his dirty laundry out there now could in a weird way be relaxing for him. Now he doesn’t have to play a role that he might not be. He is not the patriarch of a happy NBA Partridge family. Nice quote from Joumana’s lawyer about her being a shy religious mother and content to be a housewife. And then the counterclaims from Kidd’s lawyer is even better, not to mention Vince Carter’s recent ex weighing in too. You always read about how we have to do things for children and how they need positive role models and opportunities. Then when money and a divorce is involved, they become a bargaining chip or even a weapon. Divorce Lawyers are seriously among the lowest forms of life.

PHOENIX 109 CLEVELAND 90
I turned this game on when it was 101-76 Suns. Not what TNT had in mind. LeBron didn’t really get going until the fourth quarter, with Shawn Marion keeping him in check. Shawn Marion is our intern Konate Primus’s favorite player, by the way. After our Dirk-KG discussion, he came up to me and made a case for Marion being as good as either one of those two. That sounds insane, but really we’ll never know unless Marion has to become a franchise player some day. Or you could just say “No. Get out of my face with your nonsense.” 34, 6, and 6 for LeBron, while Steve Nash just picked Cleveland apart with 21 assists and 1 turnover and only needed to score 4 points. His second 20+ assist game of the season. The Suns have won 8 in a row and 9 of 10. Steve Nash after the game said “We played with a lot of concentration, something we haven’t done in the last couple of weeks.” He’s got high standards.

TRIVIA TIME: Steve Nash is right on the edge of averaging 20 points and 10 assists. Who is the last NBA player to do that for a full season? The first person with the answer gets… well, since we’re talking about assists that means we’re talking about unselfishness, so you get nothing but happiness and a job well done.