The D.A.Y. Kobe passed for Barkley and Marv 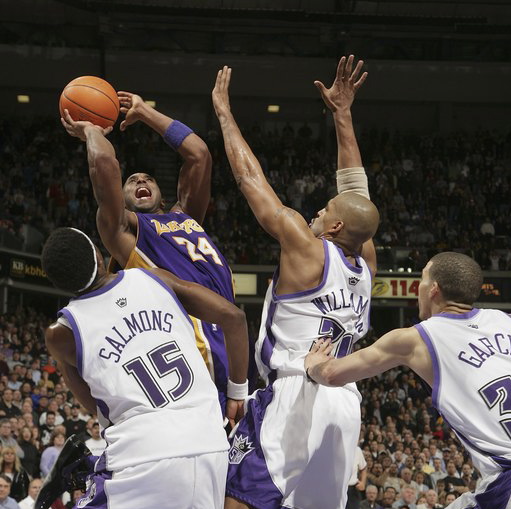 I watched the whole first half and much of the third quarter, hoping that Charles would say something crazy and Marv would catch him out there with a witty remark. The closest they came to that was when Marv mentioned Quincy Douby and Charles said “Gotta love a guy named Douby” and there was an uncomfortable silence. Other than that, it was just lots of opinion and not so much comedy. Still, they were better than 95% of the TV pairings out there. If I’d have known the Lakers would blow their lead, and Kobe would bail them out with his Bill Wennington moment, then I would have stayed up to watch more. Here’s one question to ponder: Has Kobe Bryant turned back into the Kobe from the championship years, who would fit in to what his team was doing and wait until they were desperate to step up and dominate? And is he doing this in response to Gilbert Arenas’s transformation into the ruthless post-championship Kobe? Was he scared by the sight of his refelection in the remorseless gunning of Gil and has Kobe snapped out of the need to try and prove something to people that don’t need him to prove anything? This version of Kobe, who is able to get his teammates involved and still put up numbers and take over and make all of the key plays… is very dangerous.

LA LAKERS 132 SACRAMENTO 128
The first half was a free throw contest, and listening to Barkley and Marv was the best part of the game. L.A. had a comfortabale lead, and it looked like an easy win. The third quarter the Kings made a run, but I still wasn’t impressed. I started watching the MSG channel’s special on Patrick Ewing featuring talking head Lang Whitaker. The first time he was on camera came right after the smoked out wheezing of Lou Carnesecca. Tough act to follow. Anyways, I went to bed and missed all the fireworks from this game. Mike Bibby willed the Kings back into the game, acting like this was an early 2000’s playoff series. Kobe was trapped near halfcourt, caught a glimpse of the brightest damn yellow sneakers in the universe, got the ball to Smush, and he took it to the rack to tie it up. In OT, Kobe took over, Bibby tried to keep it close, but the Lakers held on. Final numbers for the two stars of the night: Kob with 42 on 11 of 21 shooting and 17 of 20 from the line plus 10 boards and 9 assists. Bibby with 38, 7, and 6. I’ll have something brief and amusing on Bibby later today. Hint: It’s a separated at birth. And here’s a game thread from people that were able to stay up and watch.

DALLAS 100 INDIANA 91
The Mavs victory gave them their second 12 game winning streak of the season. That is impressive, and they seem to have a different guy step up every night, which is one of the key characteristics of a championship team. In this game it was Devin Harris with 24 on 8 of 10 shooting. The unfortunately nicknamed J-Ho, who has been the back to back Western Conference player of the week, had 25 and 11. The Pacers made this a game behind Jermaine O’Neal’s 20 and 16, and some dead eye shooting from Al Harrington (ninth in the league in three point percentage! Right above legit shooters Mike Miller, Kyle Korver, and Jason Terry) but the Mavs outscored them 28-18 in the fourth to pull away with the win.

DETROIT 92 NEW ORLEANS 68
The Pistons handled their biz. 27 for Rip on 18 shots. Chris Paul may have picked up some MVP votes by not playing. When he’s out there, the Hornets could be a playoff team. When he’s not, you have to deal with stuff like Jannero Pargo playing 44 minutes, taking 24 shots and hitting 6 of them. Jannero. Pargo.